Wherein I Use The Name Paul Giamatti Seven Times

Last night my boyfriend J and I were rummaging around our favorite local book store, Unnameable Books on Vanderbilt Avenue. Unnameable is about 2/3 used books and 1/3 new. They have the best poetry section of any book store I've been in in the city. It stretches over a whole wall and includes many harder to find titles and big name poets/publishers.

J found a great old copy of Vanity Fair that included Thackeray's original drawings and approximated the appearance of the first bound edition. It has a really odd cartoon drawing of Thackeray himself on the cover holding a Greek comedy mask.

On this trip I didn't pick anything up, but as we were checking out we did notice a copy of Henry James' The Golden Bowl by the register. It was face down and the back proudly displayed its Penguin logo and design scheme. 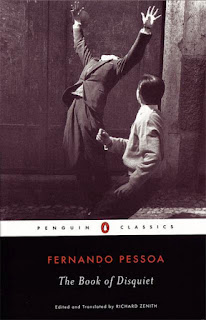 I've always loved Penguin's design. The use of out of context paintings and those black bars with simple elegant white and orange writing. Classic, simple and somehow evocative of the 'greatness' of the books they publish.

For their 60th anniversary they have added the tag line 'The best books ever written' on their classics editions. That was 6 years ago. I've never noticed it before. It hovers on the back of the James right above the UPC. It looked like a ridiculous blurb that someone would paste onto a copy of Infinite Jest or Heartbreaking Work of Staggering Genius. It felt out of place and bombastic. Not like Penguin at all.

I picked up the book to examine the quote and realized that it was Penguin saying this about themselves and got a little grossed out. I give them credit for having the balls to put it out there like that, but still. Ew factor high.

While I was holding it a man came up startled and jokingly accused me of stealing the book. Saying, 'Are you taking my Henry James? Don't steal my James!' I laughed and turned to tell him that I was just  looking at it and the man was Paul Giamatti.

Two quick things. 1) I had noticed that Paul Giamatti was in the store with J and I earlier but I do not get silly around celebrities. They are people. I have waited on many of them in my days and have even dined with a few. They aren't that interesting, really. 2) This is my second odd run-in with Paul Giamatti. I feel like you have to use his whole name when talking about him. Some people are like that.

My first Paul Giamatti run-in was at the Met with my good friend H. We were there to see a fashion exhibit and had paused in front of a painting or photo, I don't remember, but we turned and there he was. Alone. Staring at the art in front of him. He looked sad. Maybe he's just a sad looking guy? I don't know, but he looked sad that day. Maybe it was because that John Adams mini-series was just out and getting bad reviews and his face was plastered on every bus in the city. H and I joked that we should go say hi and offer him a hug. We were very close to doing it but decided to leave for cookies and coffee instead.

Also. J had recently sent me this clip:

That, dear friends, is from the 2000 movie Duets. Staring...Paul Giamatti. Who I forgot was even in the movie until I saw him there. Also, Andre Braugher! Who's currently on that silly TNT show Men of a Certain Age with Scot Bakula and Ray Romano.

All of this is a roundabout way of saying that J and I are currently in the mood for classic books. I have been reading Thomas Hardy's Jude the Obscure. And I would be reading The Golden Bowl if I had run screaming from Unnameable with Paul Giamatti's book like I kinda sorta maybe wanted to.
Posted by Michael J. Wilson at Monday, June 25, 2012