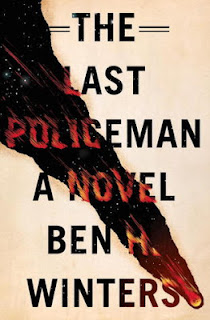 First thing's first. This cover was designed by a stand-up comedian. Who was on America's Got Talent. The same man who designed the cover for Pride and Prejudice and Zombies.

So that is a thing.

More importantly the cover is a simplistic act of beauty. The sort of newspaper feel of it, the letters being burned away as the comet glides across it. It communicates the story without giving anything away.

This will be an apocalyptic novel. Things will burn.
It will be about that.

There is an almost comic book feeling to the work. The drawing of the letters, reminds me of The Human Torch. His fire always represented by a bunch of wavy lines rendered in reds and oranges.


The sheer simplicity of the cover catches the eye. I love a good text-based cover and this one manages to be one of the most simplistic and also most evocative.

Sadly this cover no longer exists. The author, Ben H. Winters and Quirk books recently announced that this was the first book in a trilogy. With the announcement came a new cover. 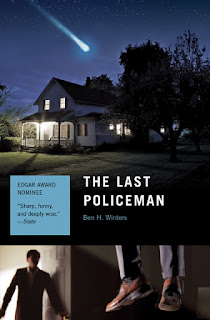 The new cover was also done by Doogie Horner. I couldn't locate information on who took the photos.

This new cover is also really good. It communicates that the book is about something weird. That there is a comet, that the world will not be the same because of it. And a good photo-based cover is welcome. Too often they are silly or used only for bargain books.

But this cover looses something of the original. It starts to look like an ad for a TV show.

The second book comes out this summer, and the new cover treatment carries through. Which is good.

I feel like there is a missed opportunity to utilize the simplicity of the first book. They could have carried that idea through just as well. A different color scheme or a closer drawing of the comet. Or any other number of ideas. 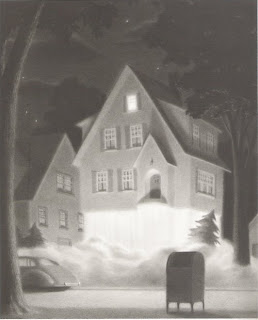 The photos on the cover evoke the work of Gregory Crewdson, specifically this one. The sort of surreal suburban magic realism of it makes sense. This is not a bad thing, in fact it's the best part of the cover. It also calls to mind the Chris Van Allsburg illustration, "The House on Maple Street".

I assume that Doogie Horner knows his illustration history. The Van Allsburg image appears in a book about a mysterious illustrator who drops off his work then goes missing. The book attempts to piece together the 'mystery'. Stephen King used the same image of Maple Street to write a short story with the same title.

That Horner would pull from these places to create a cover is not surprising. The surprise is that I like the less referential cover more.

EDIT:
On Thursday the New York Times ran a short slide show on the book design process. There is a gallery of rejected vs. final covers. Definitely worth a look.


Dust Jacket is a sometime article about the design and art of book covers. The idea is to shine a spotlight on the work of the designer separate from the author. Literally judging a book by its cover.
Posted by Michael J. Wilson at Monday, May 13, 2013