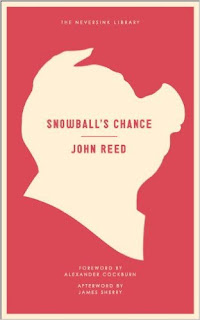 Let's get the weird thing out of the way first. I don't know who designed this cover. Melville House has an in-house design team. As far as I know that team is Kelly Blair and Carol Hayes, but I can't find trace of this cover on either of their personal sites.

Based on the look of this cover I would guess it has more in common with Hayes' other work. But both have a minimalism aesthetic going so...

If anyone has thoughts on this, let me know.

The Neversink Library is Melville House's attempt to "champion books from around the world that have been overlooked, under appreciated, looked askance at, or foolishly ignored" and they all have this silhouette design as the starting point.

I picked this book up because it is a sequel/satire of George Orwell's Animal Farm. Here, John Reed imagines Snowball, the ousted pig from Orwell's book, returning to the farm and introducing US-style capitalism/democracy to the animals. It is really worth a read, if for no other reason than the incredible way Reed has both captured and made light of Orwell's vision. That and the take this book has on post-9/11 America. 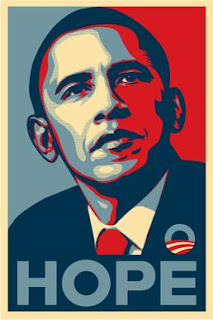 But the cover, right?

So I bought the book because of what is inside the cover, but I was immediately taken with the cover. It captures the absurdity of the pigs in both Orwell and Reed's books. The nobility in the stance. The "visionary" quality. This is a pig as Lincoln. As Shepard Fairey's Obama poster. It's PR. And it makes so much sense.

Now, Reed wrote his book in 2002 as a response to the September 11 2001 World Trade Center attacks. So the aping of modern propaganda techniques is interesting. The lead-up to the decade+ response to the attack has been a massive lesson in PR. One that culminated in the Brexit vote and 2016 US election. It is nihilism and cynicism dressed up in logos and advertising dollars.

Fairey's Obama poster is an obvious callback to cold war propaganda. But his entire aesthetic is dependant on that referencing. What is interesting is the clear parallels to Soviet-era posters.

The 'visionary' stance is an obvious trope of political discourse. It goes back centuries. Think of any statue of someone on a horse. Think Napoleon. That many of the examples that are buried in our cultural memory are also tied to oligarchs and emperors is perhaps something to mull over.

That desire to influence memory is hugely tied to both the plot of Animal Farm and to that of regimes that use propaganda.

And we do it in small ways too.

What else does that cover remind us of?

It immediately recalls the decorative form of cameo carvings. That form, where successive layers of alternating colored stone or glass are carefully carved away to created an effect that recalls block printing or murals, is most famous for the silhouetted faces on Victorian brooches that show up in every period film ever made.

That a cameo comes to mind isn't really that strange. The Romans heavily used the form in jewelry and containers. The famous Portland Vase is a beautifully preserved example of a glass cameo.

The form also resonates to any kid who went to a fair and had one of those black paper cutouts made of themselves. An entirely different form of PR. That of idealized childhoods.

It also echos ancient forms of shadow puppetry and the links to allegory and fable-telling that come with that. A form of cultural smoothing to spread information with ease.

And through that we come to the work of Kara Walker, which addresses historic and modern evils through the simplicity of paper cutouts. A form of reverse PR where the work emphasizes the darker things left out of these sorts of images normally.

What I'm saying is that is that this cover evokes a history of public relations. From antiquity to this very moment. And it drags a lot of baggage in its little pig head.


Dust Jacket is a sometime article about the design and art of book covers. The idea is to shine a spotlight on the work of the designer separate from the author. Literally judging a book by its cover.
Posted by Michael J. Wilson at Sunday, May 07, 2017