I am not a person who cares about pronouns.

I have no real reason to think about them.

Dana Levin discusses the use of the singular 'they' in relation to Stacey Waite's the lake has no saint in the LA Review of Books, August 2012: 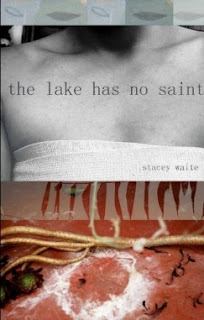 Singular they? Hadn’t it been drummed into us, since elementary school, that “they,” “their,” and “them” can only be used for plural referents? That educational bequest, it turns out, came down to us from eighteenth century grammarians — creatures on the prissy end of Enlightenment-era thinking — who began objecting vociferously to the common use of “they,” “their,” and “them” for singular referents because, Dennis Baron tells us in his article “The Epicene Pronoun: The Word That Failed,” American speech “violated number concord"

Levin goes on to discuss the history within the context of Waite's book. How Waite refuses and turns her back on gendered nouns:

Personally, I love the mixing of the pronouns. The confusion is from the run-on nature of the sentence. The meaning of the line can be taken so many ways.

My interest in the topic of singular 'they' comes from a short piece by Jen Doll in The Atlantic Wire yesterday. In that article, Doll rails against the singular 'they'. She stakes a claim at returning to a 'he' or 'she' or 'one':

There is a reason we have distinct pronouns, and that is so we can be specific. If we don't know the specifics, we should try to find them out, or use one of those handy words — he or she or one, for instance — that get around the they problem. Peppering one's sentences with some hes and shes can be kind of nice

She brings up the sexism inherent in the gendered pronouns, but decides that it is not a serious issue:

There is criticism that the use of he as the generic pronoun is an example of linguistic sexism of a sort, and I agree there's no need to always use he as the default if you don't know the gender of the person about whom you are speaking, or if you're using the pronoun to stand for persons of either gender. You can just as easily swap in a she; mix it up! Make it fun! Keep people on their toes!

While I agree with that last sentiment, and believe Waite and Levin would agree too, I find the tone a bit off. She is forgetting that there are non he and she members of the world. Forgetting the trans community as a whole is my main issue with the he-ing or she-ing of pronouns.

Levin's essay is long. At one point she brings up a set of conjoined twins who seem to refer to themselves in a plural 'I'. The doctors are at a loss to term the state of being for these two girls. They are technically individuals, but clearly see themselves as one and as two. They are a singular 'they'.

And we all are. I change my mind daily. I feel torn between things. I look at myself from 10 years ago and don't understand the decisions I made so easily. Clearly I am a 'they' as well. Levin makes the same conclusion:

This isn’t a new idea. The sense of the plural self is ancient; it fills annals of philosophical, psychological and occult thought. Jung’s theory of types and post-modernism’s focus on the socially-constructed self are but two twentieth century examples.

Doll concludes her essay with: "The singular they is ear-hurting, eye-burning, soul-ravaging, mind-numbing syntactic folly. Stop the singular they. Stop it now." I look at that line of writing and then think back to the eighteenth century grammarians that Levin mentions. They are the same desperate gamble. The same voice calling to not allow someone a passage into the world of letters.

Both are depressing. One has the benefit of being 200 years old. The men who said it long gone, the sentiment archaic. The other...is just sad. It shuts the door for so many. Limiting our speech in ways that are subtle but deadly. A singular 'they' allows us to be expansive, move beyond boarders in a way that 'he' 'she' or even 'one' never could.

I, for one, like being multitudes. Like being of as many minds as I can. While I definitely respond to 'he', I would never mind 'she' or 'they'.
Posted by Michael J. Wilson at Friday, January 18, 2013