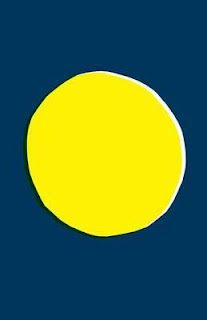 This is a book about surviving cancer. Albert Espinosa survived and wrote a book about imagination as the means of that survival. His 'yellow world'.

A lone world floating in space.

That imagination is a lone planet drifting in the darkness of space is something to think about. Each of us have within us a world separate and equal to everyone else. We are all a constellation, a solar system.

A lot of modern art is about existing in space alone. About the individual experiencing the object. Mark Rothko's Chapel in Houston, Texas is a fine example of meditative art.

You walk into a stark gray room, you are faced with 14 black color field paintings. There are a few benches to sit on. It is pure mediation. Rothko's work requires this. For his paintings to exist as art, the viewer must bring multitudes into the room with them.

In a design week interview, Gray cited Olafur Eliasson as an inspiration for this cover. I certainly see the connection to Eliasson's piece The Weather Project.

That work was installed at Tate Modern in London for 6 months in 2003. It filled their 5-storey 3,400 sq. meter Turbine Hall. I had the chance to visit it.

At the far end of the room was a giant glowing yellow disk. A sun. It floated oddly in the hazy space. The ceiling was mirrored. The floor of Turbine Hall is slanted so as you walked forward the 'sun' seemed to rise. The effect was like staring into the sun, and being oddly closer to it.

Many people would lay near the disk, staring up into the far away mirrored reflection of themselves.

Danny Boyle's movie Sunshine deals with a crew of people attempting to reignite the sun. The mission is suicide. It is a flawed film, the last third is a mess, but the beginning is beautiful. It is about saving everyone, but no one.

There are scenes in the movie of the characters on an observation deck staring at the disk of the sun. Looking at its boiling surface for something akin to a god.

In the movie, the god never arrives. In meditation, you are not looking for god but for an inner truth. A self god.

Yves Klein created a lonely blue planet in 1957. His Blue Disk is both stark and rich. Klein wished to visually represent the 'authenticity of the pure idea'.

I am reminded of Koans. These thought experiments are meant to illicit the 'great doubt'. A few examples:

'If you meet the Buddha, kill him.'

'Without thinking of good or evil, show me your original face before your mother and father were born.'

The classic we all know:

'Two hands clap and there is a sound. What is the sound of one hand?'

What happens to that yellow world when Espinosa is no longer fighting cancer?

Assuming that the world is a meditative safe place to go to while fighting cancer, does that world vanish when it is no longer needed? Imagination is a tricky place. You can disassemble as easily as assemble.

Maybe the yellow world is a koan. A place that does not exist, created as the means to protect and survive. A place that cannot be fully taken apart once put together. It is perhaps also a scar.


Seen from space our planet seems perfect. Quiet. At peace. Imagination allows us to pretend that this is true. Reality is another matter altogether.