Jacques Roubaud was the first person outside of the founders to join Oulipo. He has written mathematically structured sonnets, seven volumes of an autobiography that he refers to as 'the project', as well as translations of English poetry into French.

Roubard's goals in writing his 'project' is to discover, "My own memory, how does it work?" To "destroy" his memories through writing them down.

Hōshi lived 1118-1190. He was a royal guard, a Buddhist monk, and a poet. He spent most of his life after becoming a monk in solitude in various monasteries. He also went on long journeys that are believed to have inspired Bashō to write Narrow Road to the Interior.

I'll forget the trail I marked out on Mount Yoshino last year, go searching for blossoms in directions I've never been before.

These two are in my mind because that opening quote is the epigram in a Georges Perec book I'm reading.

That book is for my work so I won't be going into too many details BUT it is about recording dreams.

About what reality and fiction are. Especially inside our minds. The fictions we tell ourselves. That we don't even know we are telling ourselves.

I am reminded of Joan Didion's long essay The White Album:

We tell ourselves stories in order to live. The princess is caged in the consulate. The man with the candy will lead the children into the sea. The naked woman on the ledge outside the window on the sixteenth floor is a victim of accidie, or the naked woman is an exhibitionist, and it would be 'interesting' to know which. 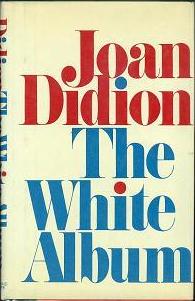 That essay, along with Anne Carson's Plainwater, make up the foundations of my views on writing these days. I have found myself as I get older thinking more about those stories we tell ourselves.

Carson's book could be viewed as a long essay/poem. It is about a relationship, several relationships, many that didn't exist. It is a book about loss. But it is about loss that we see coming.

Both works act as elegy.

But they are telling the story so that they keep going.

Dreams are the psyche resetting itself. Formatting the hard drive and other such metaphor that we could tweet about. That statement is snarky, is overly self-aware. But I will leave it.

The real. We tell ourselves stories in order to live. In order to get dressed and go to work and type on a keyboard and send an e-mail. We tell ourselves this is what we do. We invent a rationale for it. A reason. We are happy because we make X dollars a year and we make X dollars because we have that job that we might not love but we don't hate. Or, at least, not enough to run away from it.

So we weave these daily fictions into our reality. To make it work. Without it reality is not there for us. Emotionally, I mean.

Dreams are the fictions we tell ourselves in order to reboot each day. A screen saver. They are there to keep our brains from frying.

Perhaps we need the one because we enact the other.