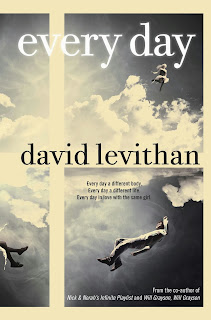 I love me some black and white photography. Even more so if the tone of the print is icy cold.

The cover to this really great young adult novel takes those loves and adds another - off-white paper.

In these covers posts I don't usually read the book I'm talking about. It's meant to be about the design only.

BUT. Read this book.

David Levithan is a great author. Every Day is about a person who wakes up a different teenager each day. Different sex, different race, different everything. The main character falls in love and must overcome the weirdness of the relationship. It manages to be a perfect metaphor for general teen angst, transgender issues, gay issues, etc. So so so so good. Read now.

Now that I got my infomercial out of the way.

This cover immediately reminds me of:

And:
The sense of wonder in it. Of drifting. It is beautiful.

Outside of the photo work, the use of a window motif makes the whole thing feel like we, the reader holding the book, are watching this scene from inside our own home. Do we open the window or not?

It's a nice visual nod to the role of reader and author. That promise that something awesome may lie inside. If you open the cover.


Dust Jacket is a sometime article about the design and art of book covers. The idea is to shine a spotlight on the work of the designer separate from the author. Literally judging a book by its cover.
Posted by Michael J. Wilson at Monday, September 30, 2013 No comments:

This summary is not available. Please click here to view the post.
Posted by Michael J. Wilson at Thursday, September 05, 2013 No comments:

The official List of Popes spans 21 centuries of human history. It begins with St. Peter and ends, obviously, with Francis. In between are 266 men. A few highlights:

- From August 1799 - March 1800 there was no Pope. The previous, Pius VI, died in France while imprisoned by Napoleon. There have been 4 other breaks between Popes. Those were for 2 or 3 years and were mainly caused by politics in the church.

- Pope-elect Stephen died 3 days after being elected and before his ordination. The Catholic church removed him from the official list of Popes in 1961. Though Stephen's after him counted him in the number after their names.

- Benedict IX was Pope 3 times. He was deposed all twice and sold the Papacy to Gregory VI because he wanted to marry. What's amazing is that he became Pope the third time AFTER he sold the seat.

- John Paul II has the third longest reign behind Pius IX and St. Peter. He was Pope for 26 years. Pius IX for almost 32. St. Peter is said to have reigned for 34 years.

This is just scratching the surface. This leaves out the Borgia Popes and the 41 Anti-Popes. And when Pius IX declared himself Prisoner of the Vatican in 1870 and the title stuck until 1929. And countless other things.

My favorite Pope-related artifact is the series of Pope Innocent X paintings by Francis Bacon. In all, there are 45 variations. Bacon was painting after the famous Velázquez painting of Innocent X.

I've always loved the horror in the paintings. The feeling of a caged soul. A trapped thing. That yawning mouth eating the world.

It is critique without being critique. Bacon famously said that he painted the Pope because he merely sought "an excuse to use these colours, and you can't give ordinary clothes that purple colour without getting into a sort of false fauve manner."

I bring up Popes because I just finished reading Hadrian the Seventh by Frederick Rolfe. The book concerns George Rose, an Englishman who is basically elected Pope on accident after Leo XIII dies in 1903. What follows is one year in the life of the new Pope. He sells off the Vatican jewels and forces Europe to redefine its borders. And then he is assassinated by socialists.

The book is an interesting look at church politics. There are pages of Papal machinations and in-fighting. There is a scene where Hadrian removes his Papal ring and confronts his Cardinals not as Pope but as George Rose that is one of the most interesting exchanges I've read recently. The compartmentalization that Hadrian/Rose puts himself through to allow himself to BE Pope is amazing.

Frederick Rolfe's book is also mostly a thinly coated wish. He was a failed Catholic priest. He shortened his name to Fr. so people would think he was a friar. The book reads like one long fever dream of a man who felt that the world owed him more. And for that alone, you should go read it. Each page is a screed on what Rolfe thinks the church should be doing vs. what they are doing.

I could discuss Rolfe's at length, but will just add that he dabbled in photography. Of young boys. He was an open homosexual in Victorian England. He died alone and penniless in Venice at the age of 53. And he carried on a long distance affair through love-letters and poems with a priest.
Posted by Michael J. Wilson at Monday, September 02, 2013 No comments: