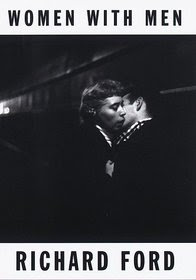 The cliche of photos telling a thousand words is easy to roll your eyes at. A moment frozen in time is ripe for the projection of the viewer.

This photo by Ernst Haas is no different. And also is an example of the cliche being proven true.

Look at the face of the woman. Really look at her expression. The man is kissing her cheek? Whispering in her ear? She grasps his jacket tightly. Behind them is a train. Which explains everything and nothing. Is she leaving him? Him leaving her?

The simple title and author treatments put center focus on the image. This is a book about relationships. Complicated relationships. Ones that may need more than a thousand words to explain. 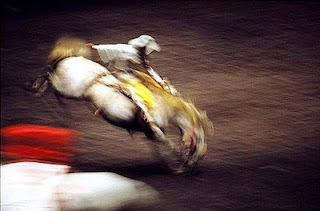 Haas' photos are strange. There is always a mystery. His most well-known works are purposefully left out of focus and blurry. He used dye-transfer to create saturated colors and enhance the moods. He was all about the question behind the image. About that story that isn't being told. If a picture says a thousand words, his speak only riddles. Beautiful riddles.
Within 12 years of becoming a photographer, Haas had a solo show at MoMA. In 1964 he created the opening sequence for John Huston's epic film The Bible. He also worked on the sets of The Misfits, Hello Dolly!, Little Big Man, and Heaven's Gate.

I love photography on book jackets. There is something visceral about a photo. Great paintings or text or illustrations are fine, beautiful even, but a photo gives you real people to deal with. Emotionally. Those people exist. You must deal with them in relation to the book in your hands. That woman and man in a train station felt things. And now I am looking at them.

Photography implicates us in our viewership. It points a finger back at us and says, You are witness to this. The Haas photo on Ford's book reminds me of the cover of Antony and the Johnsons' album The Crying Light:

The photo is of Kazuo Ohno in mid-dance. Ohno was a seminal modern dance artist in post-WWII Japan. He is most well-known for his butoh choreography. Butoh is a dance form that rose in the 50s to  deal with taboo or grotesque subject matter. You can see it as a reaction to the devastation of war, to cultural upheaval, to life itself.

They are actions that say a thousand words. Actions that the viewer must fill in. With emotion, with themselves.

Dust Jacket is a sometime article about the design and art of book covers. The idea is to shine a spotlight on the work of the designer separate from the author. Literally judging a book by its cover.
Posted by Michael J. Wilson at Monday, July 09, 2012