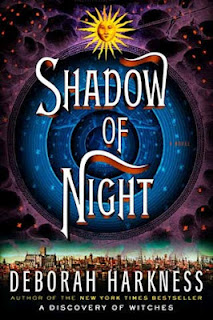 Deborah Harkness is a historian. She teaches history at the University of Southern California and has won both a Guggenheim and National Humanities Center Fellowship.

She is for serious.

Her books center around Elizabethan England. She wrote about John Dee (go read about him, seriously) and England as a center of science. In 2011 she dropped a novel called A Discovery of Witches and every review started out by talking about her credentials. Many went on to discuss at length how this serious woman of history was writing a novel about witches. Many felt condescending.

As if a smart person couldn't enjoy reading that type of book, let alone write one. Here is the description from the New York Times for this sequel to last year's surprise hit:
An Oxford scholar/witch and a vampire geneticist pursue history, secrets and each other in Elizabethan London.
I feel like I need to point out that that plot breakdown sounds a little like she tossed every current trend in commercial writing and shook it until it was a book. I haven't read the novel so have zero evaluation ability of the book. Based on the description it sounds a bit silly, but is probably fun.

I'm thinking about these things lately. Commercial appeal and how that is perceived by the public/critics/friends/family. I'm thinking about it because I am neck-deep in my own novel project that could probably be described in similar ways to how I've talked about Harkness' book above.

And I've had to come to terms with my younger self. The one that defiantly takes artistic credibility above all else. Equates 'cred' as 'not selling out'. Whatever that means. Because you want to be published right? Want words in faces, books in hands. Right?

How else does one do that besides bend a bit to whims. Emotional, physical, mental, cultural.

T.S. Eliot bent to Ezra Pound's whims when it came to The Wasteland. That poem, cultural touchstone that it is, is as much Pound's work as Eliot's. In some ways more so. Literature is full of writer's bending to whim. And I suppose that currently plopping a vampire/witch/detective into your novel about Elizabethan England is that bend.

I don't mean to conflate The Wasteland with something akin to Twilight. Don't confuse my meaning. I'm just pointing out that artistic 'cred' is a lie. A lie of a younger self. Credibility is staying true to yourself in a given moment. I firmly believe that you can do so while writing Ulysses or churning out ghost-written young adult books.

And, honestly, The Wasteland coulda used some vampires.


Sellers is my attempt to examine what books are topping the best-seller list and why. To talk about and understand the trends in popular writing.
Posted by Michael J. Wilson at Monday, July 30, 2012