Lolita, since I read it in my very early twenties, has been one of my absolute favorite books. The language is so masterfully and exquisitely manipulative! I read it at least once a year, sometimes more than once. I've found that the more I experience this story, my courtship with it changes. I don't think that this is an uncommon phenomenon. It's one of those books that makes you heartbroken no matter which character you're siding with--Lo, Charlotte, or Humself.
The first copy I purchased, now incredibly worn and wrinkled, features an ankle in a folded sock slid inside a saddle shoe. It’s an evocative image to be sure, but certainly not the most successful cover. In my opinion, the ankle-sock-shoe-skirt image is a little too easy and it simplifies the book’s contents. This book broods and swings moods. It breaks hearts and commits murder. It’s not just a story about a little girl and a pedophile; it’s a tragic and broken love story and the image of an ankle sock somehow just doesn’t do it justice. This is something I find common when it comes to covering it. As readers we should remember that Lolita is a dangerous book and the cover should reflect love, danger, heartbreak, sex and innocence. It’s a tall order. 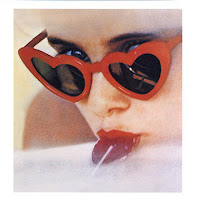 Perhaps it’s easy to talk about my first cover selection, because I believe it’s the most iconic. But icons are icons for a reason. This image of Lolita with her heart-shaped sunglasses first appeared as a movie poster for the Stanley Kubrick version of the film that was made in 1962. It has since been the cover of the book for multiple editions in several languages.

Here we see Lo peering over a pair of red, heart-shaped sunglasses. The look in her eyes suggests that she is just about to cross the cusp of innocence into something entirely more dangerous. She is definitely giving off a curious vibe. And let us not forget that lovely lollipop. Lo’s lips are absorbing both its color and flavor. She’s not chewing on it like a greedy child; she’s tasting and teasing. Collectively, this image works because it is showing rather than telling readers what to think. And what does it show us? Lolita, suspended in her world, yet peering curiously into Hum’s.

If there were ever two things that should be united it’s the work of Balthus and the text of Lolita; they’re a perfect match. Nabokov was a genius and Balthus was some painter!


Here we see a girl who, in the context of the book cover, we can safely assume is Lolita. This is a different Lolita than the one with candy and glasses, though (remember the mood swings I mentioned earlier?). This Lolita looks disheveled; one of her sleeves is pushed up, as well as her skirt. Her body language does not match the look on her face. Her legs are splayed open and inviting, but her face is not. She looks sad, a little weary, and if she’s preparing herself for what’s to come; enter Humbert. Ladies and gentlemen of the jury, look at this tangle…indeed. 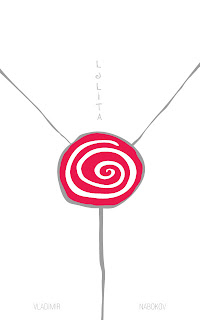 Last, but not least…In 2009, John Bertram's Venus Febriculosa held a contest to redesign the cover of Lolita. The idea behind the contest was to see what artists and designers would come up with when they were free of editors’ and publishers’ constraints. Many of the newly designed covers use text as image and many of them play with some of the iconic images we’ve seen previously, like the heart-shaped glasses and the lollipops. A lot of them feature butterflies—Nabokov was a devoted lepidopterist. Some of the covers hit the mark precisely and others, well, they look all curlicued and sappy.

In my opinion, the most successful of these redesigned covers is that of Egor Krasnoperov. It really is quite marvelous. It combines simple lines and curves to create several different images. Dead center we see the shape of a lollipop, which also resembles a target. Veering out from this red, circular image are three strategic lines. The top two form a “V” shape, the last stems down right in the center making this image resemble a young girl’s genitalia placed between thighs. This image is simple, beautiful, and completely dangerous. It makes us look longer. It makes us uncomfortable. It makes us ask questions. All of these things make Kroasnoperov’s cover wildly successful, and dare I say it, my most favorite to date.

- Hayley Heaton is an avid flaneur, as well as a poet and playwright. She lives in the middle of nowhere and loves to eat grilled cheese sandwiches.
Posted by Michael J. Wilson at Monday, August 06, 2012