Confessions of a Mask To the left is Yukio Mishima. He is considered one of the most important Japanese authors of the 20th century. Nominated three times for the Nobel. He was an author, poet, playwright, actor, and director.

He was committed to bushido, the samurai code, and fancied himself a modern vision of that tradition. His writing is full of this 'chivalry' code, as well as death and sex. 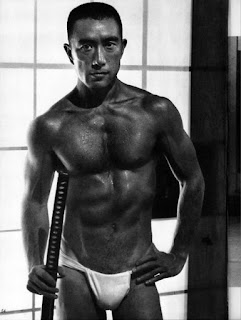 Due to the following of the code, Mishima was incredibly fit. Which is putting it mildly.

He is remembered for his writing, his obsession with anachronistic concepts of manhood, and his death. He and four other men staged a coup attempt on November 25, 1970. After locking themselves in a government office Mishima delivered a speech to the army below. They mocked him. He went back into the room and committed seppuku, ritual suicide.

The obsession with death played out in his books. Specifically, Confessions of a Mask (1949).

In that book we follow a young boy who feels 'different' from childhood to his early 20s. The book is told as interior monologue. We are given the boys thoughts on life and his friends and family. 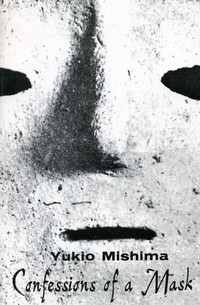 Later the boy finds a painting of Saint Sebastian by Guido Reni and basically falls in love with the image.

Mishima's book is called a novel. It is called an autobiographical novel. But I'm pretty sure it is as close to memoir as you can get. He was known to frequent gay bars, his wife was aware of it. His family sued to stop Jiro Fukushima publishing letters between the two authors of their affair. And there's this photo, part of a set, of Mishima taken before the coup attempt. 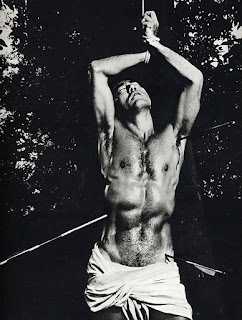 I'm not saying that posing as St. Sebastian makes you gay, but it certainly draws a thicker line between the author and his character.

Rumors swirl that the coup was an elaborate performance on Mishima's part. That it had been planned for years as a sort of perfect, beautiful, tragic finale. All through Confessions the character discusses his eventual death. Always at a young age, always dramatic. When it doesn't come, he starts to shut off his emotions. To form the 'mask' of the title.

After a failed visit to a brothel he finds himself at a party staring at the white thigh of a woman:

"...I was struck by the astringent pain that come from staring too long at something. The pain proclaimed: You're not human. You're a being who is incapable of social intercourse. You're nothing but a creature, non-human and somehow strangely pathetic."

Going from the book a portrait rises of a man who created his own cage. Afraid to exist, and concerned with 'correctness' to a degree that he beat bordered on obsessive he became a caricature of a man. Physically fit, adhering to a romantic ideal that never existed, and dying tragically.

The closet as performance. Society as stage.
Posted by Michael J. Wilson at Friday, December 28, 2012