Dust Jacket : A Guide To Being Born 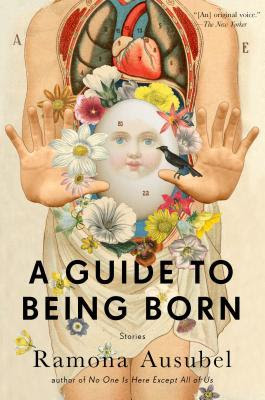 A Guide to Being Born
Designed by: Alex Murto
Illustration by: Lou Beach

Alex Murto designed that typeface, called Effing, that was meant to be sexual that floated around the internet a few months ago. His covers tend to be the 'take a nice illustration or typeface and put it together' type.

There is nothing wrong with this. It makes good covers. This is one of them.

But it has zero to do with Murto. As far as I can tell, he added flowers to the original illustration by Lou Beach and softened the colors to make it look more three dimensional.

The whole point of Beach's work is that it looks like weird acid-trip versions of Victorian illustration. The flatness is part of the aesthetic. Beach is trying to reference specific things from our past. 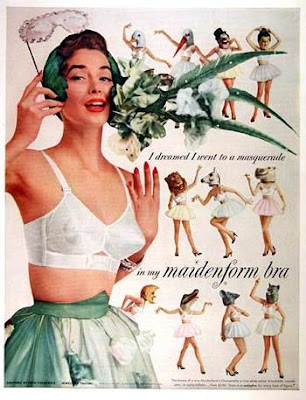 Like this ad for Maidenform from the 1950s. They did a long campaign of 'I dreamed I...' ads. The idea was that you could do ANYTHING in these bras.

Take a look at this ad though. There are women in bras wearing animal heads.

It's hard to compete with that today. If this ad showed up in Vogue next month people would go crazy over it. It is weird. And not average weird, very very very weird.

But also really kinda amazing. Like frame it on the wall amazing.

Which is why Beach does what he do.

His recent book 420 Characters (Houghton Mifflin Harcourt 2011) was one of my favorite odd finds of last year. It features 160 stories of only 420 characters. At one point Facebook limited the characters in posts to this number. Beach posted these as his status.

The book features his collage illustrations along side the stories:

Many are animal-headed men and women in various Victorian and mid-century costume.

If I hadn't told you the ad above was real, you would be excused for thinking it was his work.

A lot of his work, the cover illustration included, incorporates a sense of the medical drawing. Reminiscent of Gray's Anatomy. 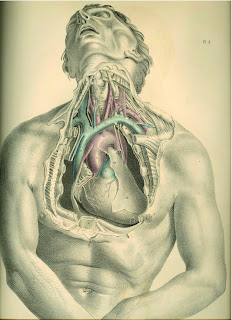 I think of the times I have gone to the acupuncturist and stared at the charts. Thinking that they are beautiful and terrifying. The same experience occurs in doctors offices. The charts and ads on their walls a constant reminder of the ways a body can deteriorate and fall apart.

Victorian illustration of cadavers and medical equipment are striking. For their bluntness. Their shocking realism. The acute awareness that the drawing was made of a dead person, that the organs seen were exposed so the illustrator could draw them.

The viscera of it can be felt.

Which, given the oddness of Victorian society and it's prudishness is interesting. That these people would decide that they would turn their noses up at so many things as being 'crude' while demanding this incredible realism in their medicine. 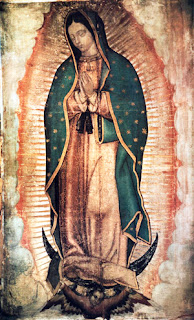 These are the people that brought us the modern form of the seance after all. Modern mysticism in general really.

That mysticism comes through in Beach's work in subtle ways. The cover reminds me of icons of the Virgin Mary. Of old religious relics in general. Something about the egg with a face on it. The pose. The absolute zeal of it.

An exhibit of Frida Kahlo's clothing recently opened at Museo Frida Kahlo in Mexico City. There are corsets, braces, a prosthetic leg. Her flowing native Mexican inspired gowns bring to mind the Virgin. The country and its history.

Beach's work calls back to Kahlo's and further back to Hieronymus Bosch's nightmare-scapes.

These artists juxtapose the beautiful and terrifying to create worlds we want to look at but never want to encounter. The artistic counterpart to the stranger in the alley, the creepy side show, the dream you cannot wake from.


Dust Jacket is a sometime article about the design and art of book covers. The idea is to shine a spotlight on the work of the designer separate from the author. Literally judging a book by its cover.
Posted by Michael J. Wilson at Monday, April 08, 2013