Child of the Storm

The re-examination of cultural figures happens with regularity. We go back, take a look, and decide if they are still worth our time. Periodically, this process allows people who were 'forgotten' or 'under appreciated' to be redeemed.

My most recent review for Publisher's Weekly was The Bully Pulpit by Doris Kearns Goodwin. It's a book about Teddy Roosevelt and William Howard Taft. The focus is on examining their respective public personae. On how they were or were not capable of directing public discussion.

The book served as a somewhat redemptive look at Taft, who is often viewed as a 'failed' President.

Nikola Tesla has undergone a much more complete transformation in public minds. You could even go so far as to say he's kinda cool these days. 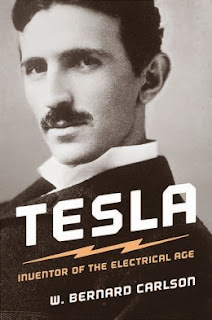 I've personally been fascinated by the life/mind/inventions/madness/etc. of Nikola Tesla for years. His battles against the might of Edison are amazing for their ugliness. On both sides. Tesla's mind was expansive. Was manic. Was destructive.

He was a bad businessman. He was capricious. He refused to profit from his designs.

There are many books about him. W. Bernard Carson's 2013 book, Tesla: Inventor of the Electric Age, is a good start. Though I feel the book is simplistic and a bit on the glowing side.

I hate a biography that paints someone as a saint. See most bio movies.

I bring this up because I've been working on a project about Tesla for a L O N G time. I've mentioned it in brief before.

I started it seven years ago while I was still in grad school. The poems in the project are a sweeping biography of Tesla fused with strange dream-like poems about energy and space. Then they finish with a cycle of poems about a trip to The Lightening Field in Quemado, NM.

It is infuriating to write about a person in this very close way.

It feels like opening a door. Allowing myself to write from some other perspective. To think in a slightly off way. A slightly not my own way.

Who knows if I will ever finish it.

At the moment the project is like Tesla's own work. Unfinished. A tower hanging out on Long Island Sound. Waiting for something.

To be declared cool enough so I can finish it.

But that's how a lot of my writing has felt lately. Not finished. Rusting. A bit broken maybe. It is a winter of putting things in the ground and seeing what happens.