If you walk around a city, any city, avoiding the tourist spots and purposefully heading down small back streets you will eventually become aware of how close together everything is. How on top of each other the spaces are.

Today you can look at these spaces, especially on the nights when trash is piled and rats are hovering, and easily think of them as hotbeds of illness and crime.

You will not be surprised that at one time these spaces were deathtraps.

In the 1890s the Lower East Side was the most densely populated square mile on earth. 1/3 of children in the area died before they were 5. Typhus, smallpox, and diarrhea were rampant enough that many wrote off the entire area and the people living there.

Of course this part of the city and those tenement buildings are pretty fashionable these days. But in 1908 the area was still referred to as 'the suicide ward'. That same year S. Josephine Baker became the first director of New York's Bureau of Child Hygiene. By 1911 she had more than halved the death rate of children.

And she did it with simple education. Teaching mother's how to properly make formula. How to keep babies protected from the sweltering summers and freezing winters. Basic things, like clothing, and checking in with health professionals.

And it was all a public work. All for free to the woman and children.

Baker's memoir of that time, Fighting for Life, is a fascinating glimpse into the very recent history of our country. And of the very recent problem of health and living conditions in our cities.

And the whole thing has the air of relevance today.

I couldn't help while reading this to be overcome with a sense that Baker's fight to get poor, immigrant mothers the help they needed with child rearing is akin to the fight over health care today. 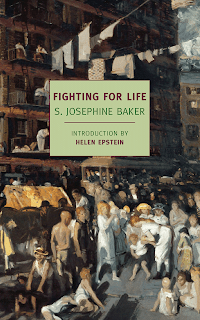 It is expensive, unwieldy, and clearly taken for granted by a lot of the country.

The implementation of the Affordable Care Act has been rocky. But no more so than any other government program going into effect. In the end it will help a lot of us to be healthier. It will aid our future generations in the same way social security has.

In the same way Baker was able to lower the death rate of children, the ACA will eventually make us healthier people.

The fact that we seem to not see the benefit of this is shortsighted and depressing. But unsurprising. As a country we react to things, we do not pro-act. And we tend to be shortsighted. It is rare that we gaze generations ahead and attempt to set ourselves up to succeed long term.

The New Deal was one of the times we attempted to reach into the future and fix it before we got there. The space program was another. The ACA is yet another.

We just need to not get in our own way.
Posted by Michael J. Wilson at Thursday, December 26, 2013