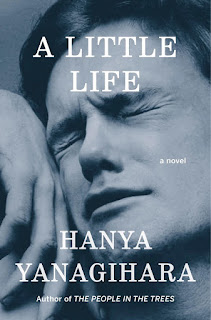 Not just physical, but psychic. We are conditioned to hide ourselves when we are feeling things greatly at either end of the spectrum.

When we are grieving, for instance, we are told that to somehow find the 'strength' to get through it is better than losing control of ourselves.

Julia Louis-Dreyfus has been lauded for her ability to show up to the Emmy's this week and accept her 5th consecutive award while int he midst of grieving for her father. He died two days ago. This is not courage, it is holding it together at its most visible. And while I applaud her and her accomplishments, I don't know that I applaud her ability to 'hold it together' for a few seconds on a national stage.

In great happiness we can also be viewed as crazy. Remember Howard Dean?


This is a ridiculous duality. And while this one incident is not what ended his Presidential run, it certainly painted him in a way that, over a decade later, is still hard to erase.

So. Let's talk about the cover to this book.

Cardon Webb is playing a game with us that I will get to in a second, but first I want to ask how we react to this image.

My first thoughts are of St. Teresa, Joan of Arc, the Pieta. They are images of women in religious distress, but also in the midst of religious ecstasy.

Webb picked a photo by Peter Hujar called Orgasmic Man. It was taken in 1969. Based on the title alone I think you can tell where this is going.

Religious ecstasy is sexual ecstasy. One only need to spend a little time looking at paintings and sculpture depicting people in the midst of such a state to see this.

Take a moment to think of these kinds of images.

Who is filled with the power in these religious ways?

I'm guessing that you thought of an image like the one of Joan of Arc from the Dreyer movie. Culturally, we are conditioned to think of women in the throes of passion. They are to be 'taken'.

St Teresa is shot through with the power of god's 'arrow' of love and as a result she collapses into a state of grace that few could know.

The genius of the Hujar photo is that it twists the concept. We see pain because we don't think that an image of a male could possibly be of the weird between pain/ecstasy that is at times seen as religious. Hujar refuses to show the moment after this, the one where the subject relaxes.

The only male figures who are popularly known for their moments of religious ecstasy are St Francis and St Sebastian. These images are less sexual in their depictions. They are quieter. St Francis usually looks asleep.


St Sebastian also manages to look very languid despite being shot through with arrows.

Amazingly the two saints look more like the moment Hujar doesn't show. The moment after. The one of release. Women are shown being taken. Men are shown after the taking. After they have probably taken.

At the top I asked you to imagine what pain looked like. In reality I'm more interested in the next moment. After the initial pain/pleasure sensing. What does that look like? I would argue that the visions of men in ecstasy tend to show that moment. That we are culturally not going to show male figures in the throes.

Dust Jacket is a sometime article about the design and art of book covers. The idea is to shine a spotlight on the work of the designer separate from the author. Literally judging a book by its cover.