This is the last part of the reviews of my 2011 reading list. I decided to leave off books of poetry and book that I re-read. I may bring up some of the poetry at a later point. I'm working out a series of reviews and they may play into that.

Or not. We will see. 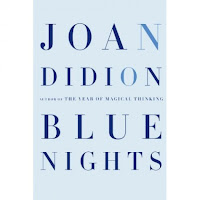 Blue Nights (2011) by Joan Didion
In 2003/2004 Joan Didion was dealing with a lot. Her husband, John Dunne died suddenly and terribly. Her daughter Quintana was in a coma with septic shock. After recuperating a little, Quintana would suddenly die in 2005 just as Didion's book on her husband's death went to print.

In the 6 years since then Didion has kept a low profile. Blue Nights is a sort of summing up. It is a lesser Year of Magical Thinking. A quieter, less focused attempt to deal with aging and the death of a daughter and life as you knew it. I would say it is unsuccessful but it is not that bad. It is just a failed attempt at summing up a life.

I love that Didion had the balls to attempt. Few can talk about themselves as clearly and wonderfully as her, and few have made such an art of spinning self-centered narratives into universal tales. This is a great glance back, a sounding call that Joan Didion is at the end of her life and refuses to go without talking about it as best she can.

We all know about Don Quixote. A man in the later years of his life takes up a tin can helmet and rides a donkey against windmills he thinks are ogres in an attempt at chivalry.

What is interesting is that that moment lasts for one chapter in a gigantic book. A book divided into two equally giant parts of 500+ pages. In those pages Don Quixote attacks priests, frees criminals, leaves a poor boy to be lashed by his master and manages to be beaten numerous times. He also gives us two (yes two) mini-novels written into the story as tales told by travelers to each other.

The wonder of Cervantes is that he shows us both reality and Don Quixote's strange hallucinatory version of it. The prose reads like poetry, like Shakespeare, like Dante. It is comedy and tragedy all in one. I will admit that the going is slow due mostly to the aforementioned mini-novels, they have no bearing on the story of Quixote and are quite lengthy. Fortunately they can be skipped.

I look forward to reading the second part where Quixote must deal with the fame he garnered from the first book. Cervantes breaks the fourth wall and apparently it is great.

Man, I hated this book.

Not a single likable character. A setting made up of mostly desert and rocks with a few sparse trees. The main push of the plot is the Israeli/Palestinian conflict. Written in the point of view of Israelis there is little on how Palestinians feel about things and I found the moments of doubt in the characters to be shallow.

Basics. A woman's youngest son is off to war. She freaks out and decides that if she leaves her house the military cannot come tell her that the boy has died. If he dies. IF. She grabs an ex-lover and they go for a hike in the wilderness. As they walk she tells of her sons and husband. It turns out that the ex is the father of the youngest son and that the husband knows and the son does not.

I wish there was more. But that's it. It unspools in long rambling dialogue. Everyone has horrible lives, everything is sad. This is the most heavy-handed of heavy-handed stories.

I feel bad about not liking it. A lot has been made of the fact that Grossman's son was at war when he was writing the book and that the son died soon after he completed it. And I sympathize with it. Like the protagonist, Grossman wrote to avoid the reality. A sort of pocket of time where the son would forever exist no matter the outcome.