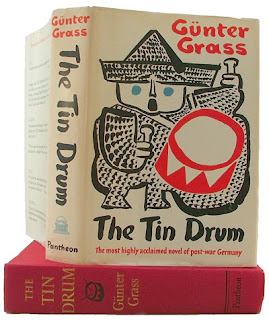 
The dust jacket is an ephemeral thing. It is really only there as a means of keeping the hard cover of a book from wear. The dust jacket design is mostly a marketing ploy to get our eyes to stop on a particular book and open our wallets in response.

This is the first of what I hope to be regular posts on dust jackets that I find beautiful, or interesting, or important. I will probably veer off into general book design when it applies, so don't quibble. This is meant to be about beauty.

The iconic image on the cover of Günter Grass' The Tin Drum appeared on the first edition in 1959. It has since been on most editions of the book. The young drummer was drawn by Grass himself. He has drawn the covers for all of his books, including Cat and Mouse (1963) and Dog Years (1965).

He has a distinct artistic style that compliments his magical-realist writing style. There is a whimsy that also contains something ominous.

Grass's illustration style calls to mind wood block prints, finger painting, tribal art. There is a connection to medieval art as well. Look at the eyes and nose on this Coptic icon from the 6th or 7th century. Simple lines that are decidedly not to scale or reality. Shortened forms that are more about impressions then anything else.

The scale-like features across the figures resemble armor. They recall Egyptian and Medieval illuminated texts. Grass manages to call to mind a lot of history with a simple drawing of a boy and drum.

There are also recalls to primitive arts. The notches on the boy's body are like the nails on this Congolese power figure.


The notches also resemble Coptic writing and other early scripts such as Cuneiform, tying the artwork to the foundations of language itself.

While I am certain that Grass probably just liked this style, there is a chain that leads from him back to these images. I also understand the dangers of reading into something. Know that I say all of this with heavy grains of salt.

Many artists enact their aesthetic without an eye to all that fed into it initially. Take a little Coptic here, a tad Byzantium there, and you get a Nobel winner who managed to design and execute his own covers for most of his career. A rarity in any art-form. Especially in today's market-minded publishing world. Today Grass would not get to put his drummer boy on his book without a fight and a strong agent.

If you have a favorite cover, or story about a dust jacket, share in the comments.

I would love some feedback on this post. Let me know if this was awesome or not. I'm thinking of expanding the blog to include more pots like this and the Reading List 2011.
Posted by Michael J. Wilson at Monday, February 13, 2012