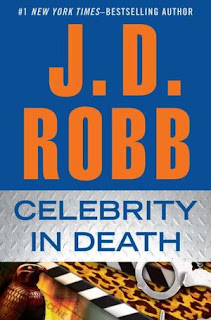 J. D. Robb is Nora Roberts. Nora Roberts has written over 200 novels and has over 400 million copies of her books in print. 124 of her books have been NY Times bestsellers. Not one of her novels has been reviewed by the NY Times.

This is the 43rd book in the "In Death" series. The 44th will be out in September. The first was in 1995. Just look at that math for a second. She averages 2.6 books a year in this series alone. When you factor in her other series and stand-alone books this woman averages about 7 books a year.

I can't even begin to understand those numbers.

Look at the NY Times hardcover fiction list for a second. 4 of the top 5 are the latest installments in series. Some of them very long-running. The names are the ones you'd suspect as well. Jodi Picoult, James Patterson, even Stephen King and Anne Rice in there for you fans of the 80s and 90s. If you extend to the top 10, 6 books are the latest part in a series. No wonder we keep getting sequels and rehashes of old things. Clearly we like them.

What about these authors keeps people coming back. Is it purely familiarity? These being the written version of watching Two and a Half Men? Or, is it simpler than that.

I am in the middle of reading another long-running series that is no stranger to the best-seller list; Robert Jordan's The Wheel of Time. I won't bore you with the details, but it is a drawn out fantasy series that spans a projected 14 books at an average of 800+ pages each. Nora Roberts lands about half of that with each of her books. But Jordan didn't churn out 7 a year. He didn't even write all 14 books in 23 years. And he died before finishing.

What has kept me reading isn't that Jordan is a particularly great author. The characters are by-the-book and the plot lifted from Lord of the Rings note-for-note. The pacing is glacial and the word count gigantic. I read them because they are digestible.

I would suspect this is why my mother reads Mary Higgins Clark books. Why my father likes 24. And why Two and a Half Men is still on the air.

Nora Roberts isn't even a new phenomena. Corín Tellado has written 4,000 novellas. R. L. Stein has taken us to Fear Street and given us Goosebumps around 400 times. Enid Blyton wrote 600+ books for children, including Noddy. Roberts isn't even close to the high water mark of Barbara Cartland's 23 novels in one year and 722 total.


I'm not debating the merit of the work. Easily read, simple, escapist entertainments are a huge part of our lives. In some ways these are the most important part. They provide a refuge from whatever it is you need shelter from. As Roberts herself put it when discussing why she still writes shorter, paperback fiction, she "[remembers] exactly what it felt like to want to read and not have time to read 200,000 words." from her years as a young mother of two boys without much time to read.

In 2007  Time named Roberts one of their 100 Most Influential People saying she "has inspected, dissected, deconstructed, explored, explained and extolled the passions of the human heart." That year only two authors made the list, the other was David Mitchell, who has won the Man Booker Prize.

Sellers is my attempt to examine what books are topping the best-seller list and why. To talk about and understand the trends in popular writing.
Posted by Michael J. Wilson at Monday, March 19, 2012