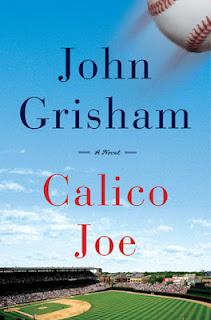 Writing ebbs and flows. Sometimes it feels good, easy, like magic. Other times that magic fails and the whole thing honestly goes to shit.

I wonder if writers like Grisham have these shit days. He currently is turning out two books a year. Three if you count the young adult series he recently started. Almost every single one has the same basic plot - lawyer, unbeatable/confusing case, miraculous solution.

He is the definition of 'commercial'. And here he is giving us a book about baseball. About a pitcher purposely hitting and injuring a batter. About a son reuniting these two now retired players years later.

If this sounds like the plot of some terrible movie, you would probably be right. I wouldn't be surprised to see this popping up any day now since 9 of his books have been turned into films. The Firm was recently re-imagined as a TV show.


I haven't read Calico Joe so am not in a place to judge the writing. I can only guess how this 208 page book lays out this decidedly well-trod story.

When I have a block I try to write outside my comfort zone. In 2004 I started writing long-form poetry intensely studying one object. Exhausting my abilities to describe in an attempt to jump start the muse. It worked. I'd like to think that this little jaunt afield (HA!) from the law is a similar thing for Grisham. The difference is that mine don't sell millions of copies.

Grisham has sold more than 250 million copies world wide. He is one of three authors to sell 2 million of one book in a first print run. Tom Clancy and J. K. Rowling are the other two.

These authors are above critique. It is useless to say that clearly Grisham writes the same story over and over, useless to point out that this 208 page book is not worth my $20. To call Grisham vapid, dull, predictable or anything else is beside the point. The point is that he wrote a book about baseball instead of lawyers. And that should be exciting. But it just feels like a calculated effort to get people to write headlines like 'Grisham Strikes A New Pitch' or 'Bottom Of The 9th And Grisham Fakes On The Fly'.

In other words. Yawn.

On Wednesday I'm going to talk about another author who seems to write outside what's expected of him but with very different results.


Sellers is my attempt to examine what books are topping the best-seller list and why. To talk about and understand the trends in popular writing.
Posted by Michael J. Wilson at Monday, July 02, 2012