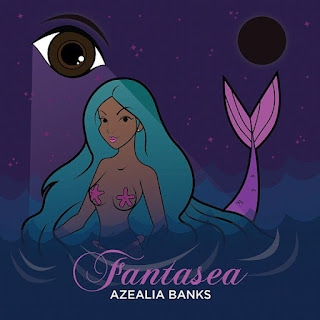 I've been listening to Azealia Banks' new mixtape Fantasea all day while I vacuum and mop. You can download it for free. There's a link in this MTV article.

All week my headaches have come and gone, so I'm writing very little. I did read The Ten Thousand Things by Maria Dermoût. 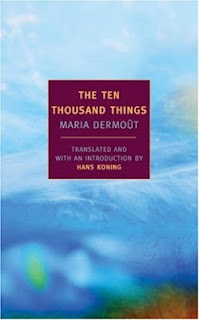 Dermoût was not published until she was 63. The Ten Thousand Things was released in 1955 and then translated into English in 1958. Time named it one of the best books of the year alongside Breakfast At Tiffany's, Doctor Zhivago, and Lolita. She is still considered one of the great Dutch authors.

She was born in Java and her work could be viewed as a precursor to post-colonial writing. The novel follows a woman as she returns to her ancestral home with her young son. The island is a world of magic and danger. The book reminds me of Gabriel García Márquez, Murakami and specifically of Marilynne Robinson's Housekeeping.
The worlds of Ten Thousand Things and Housekeeping are of women wrapped in, and dealing with, life. In Robinson's book we have two girls orphaned and descending into a world of water and drifting boundaries of 'home' and 'family'. Dermoût's book gives us a woman coming home after being abandoned by her husband/lover. She comes back to a world of myth, ghosts and superstition.
Both books deal with the world overtaking the main characters. Taking them in then altering them to fit within. And both have similar, swirling voids of an ending. The main character left staring into the abyss, whether the view is negative or not is up to the reader.
What does this have to do with Ms. Banks?
Well. She's part of the supposed resurgence of the female rap star. And she's already come head up against the culture and in response said she wanted to be considered a vocalist, not a rapper. And her new album is themed around water, around the ocean. And she seems interested in creating a world for herself outside the one that people have made for her.
Basically, it's connected by feminism, post-colonialism, and the fact that I have a headache and am mopping. Just go with me, OK? Thanks.
Posted by Michael J. Wilson at Friday, July 13, 2012