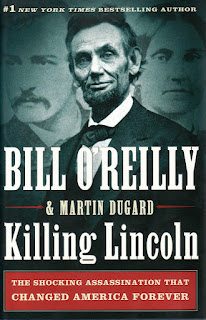 I am not interested in giving O'Reilly any press. Even the small press a post on this blog would give.

As of next week this book has sat on the bestseller list for a year. It has held firm at number 4 or 5 on the list for months. So I have to acknowledge it if I am going to seriously consider these posts as looking at best-selling books.

So this book has been selling for a year. Selling a lot. There are apparently 1million copies in print. In 2012 that is a giant number.

What new things are there to be told of this over-discussed part of our history? Why is O'Reilly privy to these new things?

It was the first successful assassination of a sitting President. Yes, it was shocking. But does it warrant the scare quote sub-title? Especially when you consider that we had just exited a much more shocking period in the Civil War/Reformation period.

In 1835 Andrew Jackson had two pistols pointed at him at point blank range. The guns misfired allowing the President to beat his attacker with a cane. In 1864 Abraham Lincoln was riding a horse when a gunman fired at him. His horse bolted and later they found his hat with a bullet hole in it. This breach of security is way more shocking given that the shooter was only a few yards away hiding in bushes.

Yet did any of these change America forever?

O'Reilly's follow-up to this will be called Killing Kennedy. Seriously. Was that death less a change forever? I would argue that Kennedy dying at the height of the civil rights movement was way more emblematic of the time he lived in. Was way more shocking for the movement. It said that no one was safe in an America. I think that Lincoln's death was a sad end to a long war. It seemed pre-written that he would not survive. Kennedy is an odd mirror death. A sort of other end of that civil rights question that the Civil War was/was not about.

I don't think either death really changed much though. Garfield and McKinley were killed while in office. Were their deaths somehow less changing? Both of them were killed by half-craze men. Garfield by a former speech writer who wanted to be an ambassador to France; McKinley by a man who claimed anarchist ties and hoped to gain an unnamed political outcome.

I find these more shocking due to their less ideological or political-based reasons. These senseless killings. are the ones that I wish we described as 'changing America'.

I'm not saying Lincoln or Kennedy deserved to die but their deaths, the reasons behind them, they make sense. From a position of the where's and why's. These were deaths for reasons political, racial, class-based. They were deaths with sanity attached.

I'd love to see a book about McKinley in the top ten for a year.

Though I think this book is there for darker reasons.

I think it points to the great racial problem in our nation's past and it says 'this, this is where it started'. I mean that it is where the civil rights fight started in earnest. And to some this is not positive. Lincoln represents all that is great and conflicted about us. Race, politics, class. All of it.

The death of Lincoln did change America. But so does every moment in time. Every death. I think we are obsessed with the deaths of great men and women. We obsess over life cut short. We obsess over our own dark hearts, could we do the same? Will we?

I look at politics today and see the same type of faces that have always been there. The same crazed men brandish guns for the same reasons. The shooter in Norway with his vague political motives. Gabby Giffords shooting in Arizona. All of these things are the same as the other, older ones.

In essence, we have never forgiven ourselves for ourselves.

Sellers is my attempt to examine what books are topping the best-seller list and why. To talk about and understand the trends in popular writing.
Posted by Michael J. Wilson at Monday, September 24, 2012