The video above shows Riusuke Fukahori preparing works form his exhibit 'Goldfish Salvation' that appeared at the ICN Gallery in London last winter. Fukahori painstakingly paints a layer of the work then covers it in clear resin. He then paints the next layer, and the next, and so on until he has a shockingly realistic work of sculptural painting.

You are probably expecting me to make some sort of parallel between my writing and Fukahori's work. And I easily could. The comparison is right there.

Writing is a layered process. It is slow. You add a layer and then another. Between are bits of mortar. The work is unseen, flat, lifeless, until you add that final layer of glue on top.

I could leave it there and we'd all be happy about it. But I don't think it works like that.

I view writing as a long-form game. Like history. There are maps and charts, and plans, and budgets and steps along the way. But there are also lengthy periods of not much happening. It's those moments that I think matter the most.

I don't write for half the year.

That fact alone probably discredits me to many as a 'serious' writer. As I mentioned in the first post on process, I also don't really plan. These two admissions together make me look a little sloppy in the seriousness department. I recognize this fact and I respect the opinion in it.

Honestly though, I need that time off. After undergrad I didn't write for 6 months. I panicked over it, went without sleep, spoke to my friends, my teachers, I actually thought I had 'lost it'. That mythical thing that brings the words to the tongue. I feared the death of my muse.

Then I started again. Just one day. I picked up a pen and started. And then wrote some amazing stuff for about 10 months or so. Then I broke away from it again.

And I realized after a second moment of panic that this was my method: I sponge for a bit, then spit it out.

Take my novel (the one I'm trying to get an agent for). I thought about it for over two years. And by thought, I mean had the idea sitting there. I didn't actively think on it, but it sat, collecting mind dust until I had four months free to spit the thing onto paper.

And it felt good. It felt like the right time.

Or course this method could lead to things sitting for years. To things not happening. But that happens to people who write every day also.

I did that write every day thing. I know I can. It also felt like work, like a bore. It felt like something I had to, not wanted to. It felt as wrong as a thing could. So I stopped. It took three years, but I did.

So what is my point?

That I think my process of disorganized writing is perhaps closer to Fukahori's process of painting than I initially allowed. That my process is certainly layering. That the time between layers is very drawn out as I wait for the resin to hold. That the paint looks flat, lifeless, definitely unreal. Then I add, eventually, the final layer and it pops into focus. It spins into life. 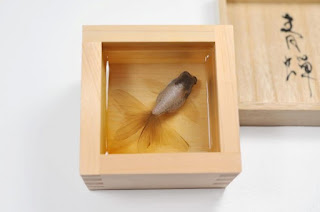 Email ThisBlogThis!Share to TwitterShare to FacebookShare to Pinterest
Labels: art, cluture, history, i, me, myself, on writing, writing