A body floating in an expansive void.
One being. Alone.
Every element of the environment out to kill them.
No way to contact anyone.
No way to get home.
Nothing but wits. And luck. To save them.

This is the basic plot of two high-profile movies in theaters right now. Gravity and All Is Lost. 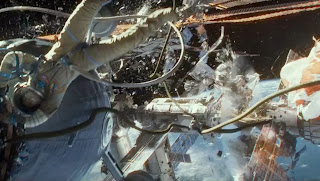 Each begins with an almost immediate calamity that leaves our 'hero' alone and adrift. A breath from certain doom. In Gravity, Sandra Bullock is at first given the safety of George Clooney. But that is soon taken away. Robert Redford has no one from the start. Neither movie has much dialogue.

Both include sweeping views of the isolation of the characters. Disorienting rolling camerawork that conveys the instability of the moment. 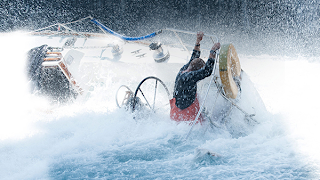 Leaving the theater after All Is Lost this weekend I was overcome with a sense of 'why?' about these two movies.

Why stories about such absolute isolation. About death. About silence.

Because both of these movies end with impossible survival in the face of all of this. In fact the endings of these movies are almost metaphoric in their need for the characters to come through the fire and still not die. To, at the last moment, be saved, reborn.

J and I were talking and I feel like this is some post-Iraq War psychology. Though real American in its focus.

You can pretty safely argue that post-9/11 the US was in a serious state of PTSD. Lashing out and going through the many stages of grief. The fact that other countries took the brunt of that is deplorable. But it is.

Are these movies a sort of selfish 'we came through that' played out on the screen? I'm sure there is some of that at play here. At least from a cultural stand point. We as a country certainly didn't actually deal with anything post-9/11. Most Americans certainly felt little of the impact from the decade of war we are emerging from. 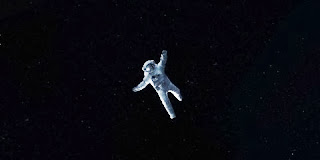 That the movies are about death but against all odds the protagonists survive. I see them as attempts at explaining human will. Ingenuity. That we can face great darkness and come out into light.

The final scenes of both movies involves the character literally reaching for light. Bullock crawls out of the space craft and then onto a beach. She stands in the rays of the rising sun. It shines over her as she stumbles, like a new born, into the future. Redford is drowning. Is actually in the process of giving up, when a hand reaches into the darkness. He reaches up. Rays shining into the water from above.

Culturally we are in a dark place. The economy has improved, but not for all. Politics has become overly fractured. There are little wars igniting and smoldering all over. We send drones to fight our ever elongating wars. Zeno's dichotomy playing out in real time, these wars are in a perpetual state of 'ending'.

That these movies seem to predict a light at the end of the tunnel. That both seem to use their respective isolated environments as a sort of parable for the death/rebirth cycle and the improvement of self speaks to a rebirth through fire. Bullock in the shower of space vehicles entering the atmosphere and Redford literally starting a ring of fire that he is submerged beneath.

J pointed out that the end of Zero Dark Thirty could be interpreted in a similar way. The final shot of Jessica Chastain sobbing uncontrollably, alone, in a plane can certainly be interpreted as the culture realization of what we have spent the last 10 years doing.

If Chastain represents America going through the post-9/11 stages that America did. Then do Bullock and Redford represent our hopes for what comes next?
Posted by Michael J. Wilson at Tuesday, November 12, 2013