The Bridge of Beyond

I have an unsteady relationship to post-colonial literature. In general I find it too interested in theory to the detriment of story and style.

Oftentimes I find the need to make "A Point" to be placed above all else.

Few books exemplify this more for me then Foe by J. M. Coetzee. Or, for that matter, all of Coetzee's work.

Foe is a retelling of Robinson Crusoe. Or a reworking. From the perspective of Susan Barton and Friday. She is a fellow castaway with Crusoe. The book is told as if Barton is trying to convince Daniel Defoe to tell her story in print.

The implication is that he took the story and focused on the white male. Barton herself is responsible of telling the mute Friday's story as she feels fit.

The idea sounds interesting because it is.

The problem is that it hits you over the head with it's themes of sexism and imperialism. It is telling that the section on Wikipedia about the books themes is over double the length for the plot.

Wide Sargasso Sea is more functional for me as a book. Jean Rhys novel is a prequel of sorts to Jane Eyre. The book details Bertha Mason's life. How she got to be Rochester's wife. And why she burns it down at the end.

This book is more about the inner sickness that imperialism/colonialism wrought. Antoinette/Bertha's mental illness is the result of the coming of white men to the Caribbean. Similar in concept to Things Fall Apart. Though Rhys' book is more baldly presented.

Post-colonial theory is important. I don't want to diminish it in any way. Taking the status quo and re-examining it from the perspective of the oppressed and marginalized provides a whole picture of history.

Even when that examination becomes bitter it is still worthy. The problem arises when the theory of re-examination removes the art from the art.

Achebe's book is more in tune with my idea. The 'message' of Things Fall Apart is the same as Rhys. But the book is also concerned with character development and being a whole work on its own. It also is told in a style unique to Nigerian culture and history. Both Rhys and Coetzee tell their stories in very European styles. In the case of Coetzee, also very coldly.

Recently I was gifted by J a NYRB club. I get one of their newer books every month. It has meant that I've spent most of 2013 reading NYRB books. They are consistently fascinating. August's selection was The Bridge of Beyond by Simone Schwarz-Bart. 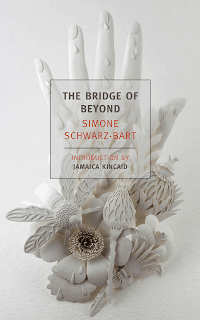 The book tells the story of Telumee from birth to death on the island of Guadeloupe in the French Antilles. From being abandoned by her mother to working in the house of rich white plantation owners to having a quiet cabin near some sugar cane fields we watch Telumee have failed relationships and grow old.

The book manages to be an indictment while never being histrionic.

The tone is one of overcoming. Telumee is a spot of brightness amongst the despondent.

It helps that the tone is one of magical realness. That it is short, even, and beautifully rendered.

I was immediately reminded of The Ten Thousand Things by Maria Dermoût. I briefly talked about that book before. In that story the world is slowly dissolved into fantasy. Into magic. The effect of living in the world consumes the main character.

Which is the main theme of most post-colonial novels.

To go back to Foe for a moment. The book ends with Barton staring into Friday's open mouth. That open mouth "...is not a place of words. Each syllable, as it comes out, is caught and filled with water and diffused." That deeply poetic moment sums up the idea that Coetzee has spent a whole book getting to.

The slave ships, the oppression, the taking of history, of language, of family. Everything dissolved. It is a triumph of simple language revealing much. And it comes in the last two paragraphs of the book. It also manages to sum up everything about post-colonial theory I like and dislike.

It is too technical.