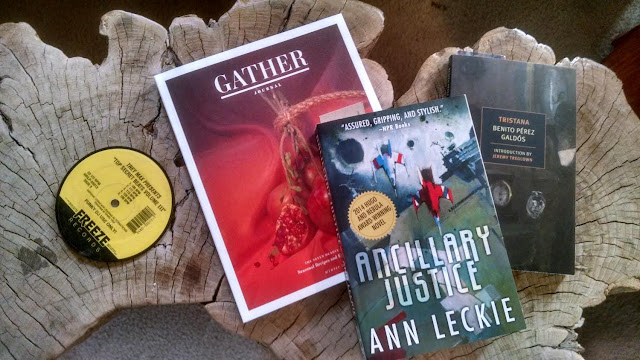 Gather Journal is an amazing food/drink journal that comes out twice a year. I had the good fortune of having my poetry featured in an early issue. The recepies are luxe, the photographs are insanely beautiful. Each issue is a mood. The current one is on the seven deadly sins. There's a cocktail in it that involves cotton candy.


I started Ancillary Justice by Ann Leckie yesterday. It is part one in her Imerial Radch series. I'm not very far in but the book is fascinating, the main character is several thousand years old and has had several thousand bodies, including space ships. We join them as they have been reduced to one lone human body. Unique in the use of a non-gendered point of view of the world.


Benito Pérez Galdós is widely considered one of the best Spanish novelists. Many consider him second only to Miguel de Cervantes. I will be honest, I started Tristana weeks ago. It's only 170 pages but I am finding it HARD to get through. It's the tale of Tristana, a woman (a girl honestly) who is taken in by an aging (he's nearly 90) Don Juan type. He refuses to marry her, she is deflowered, and then falls in love with a painter. It's VERY Victorian, but maybe a little more honest about the creepiness of the era. I am just not being taken in by this story though. It is perhaps an issue of time. I am in the midst of teaching Existentialism and the sexual problems of people in big houses is maybe...counter that. The 1970 movie version was directed by Luis Buñuel.
Posted by Michael J. Wilson at Saturday, December 03, 2016