FACT!
On this day in 1960 Nikita Khrushchev pounded his shoe on a desk at a UN General Assembly meeting to protest the Philippine assertion of Soviet Union colonial policy in Eastern Europe.

'55 Cancri e' is a massive 8x heavier than the earth while only twice the size. Its close orbit means a year is only 18 hours. The surface temperature reaches 3,900 degrees Fahrenheit. The surface is covered in graphite and diamonds.

It is also only 40 light years away.

They unveiled a new logo. It's terrible.


The new Wendy icon is fine. I like the update. I like that she is flesh colored instead of ghost-white. I like the hair and the new circle. The script choice is...odd. It's too rounded, too silly. It looses all appeal. Why not use the old logo with the new Wendy? Sad.

Mo Yan was awarded the Nobel in Literature. The Chinese author's pen name means 'Don't Speak'. He is best known for Red Sorghum and the film version. His latest novel Life And Death Are Wearing Me Out was written in 42 days with traditional brush and ink.

Buy one of his books.

This gigantic Batcave model exists in the world. It weighs 100 pounds and took over 800 hours. Look at the builder's Flickr stream here. 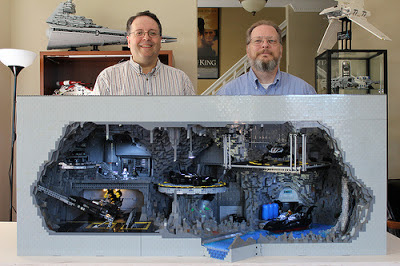