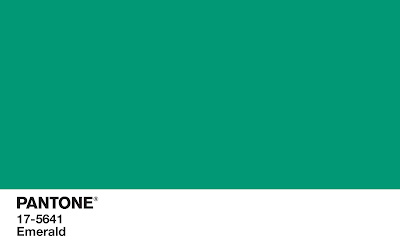 Pantone was founded in the 1950s in New Jersey. It is now best known for those fan-shaped booklets of color charts. They have a proprietary system of color coding, PMS, that is used by fashion designers and governments alike.

Pantone claims that the color numbers and pigment values for all 1114 colors in their PMS are intellectual property. In other words, they believe they own the makeup of the colors.

Every year they hold a meeting to pick the color of the year. The color that most matches the zeitgeist of the moment. In 2011 they picked Honeysuckle and said this about the choice:

In times of stress, we need something to lift our spirits. Honeysuckle is a captivating, stimulating color that gets the adrenaline going – perfect to ward off the blues.

Emerald brings a sense of clarity, renewal and rejuvenation, which is so important in today's complex world.

And I mean...sure. We need rejuvenation. And I do love me a jewel tone. But...really? And the descriptions are really similar. Honeysuckle is stimulating and will get adrenaline going and Emerald will aid rejuvenation. I guess I'm not seeing a difference.

Tell me that pink makes us think of birth, of spring, that it reminds of of life. Tell me that green is vibrant, is life in full blush, is summer. Give me something a bit more...evocative of color.

Color is emotion. Is sense memory. That deep green reminds me of the western coast of Wales. Of the long expansive fields dotted with crags of steel-colored rock. There are probably sheep out there. Maybe mythical creatures. It reminds me of my childhood. Of a long bike ride through the Cotswolds that ended at a large tower in the middle of nowhere. The sun was dappled and I was wearing a neon green hat that said 'London' across the front of it. I probably had on acid-washed jeans. Because I was a baller when I was 12.

The pink makes me think of pigs. That makes me think of Charlotte's Web. Which makes me sad. But in a really great nostalgic kind of way. I'm thinking of the annual Centre County Grange Encampment and Fair in Pennsylvania. There are these long tents full of pens of animals, each a prize-winner or an attempted winner. Rows of rabbits, chickens, pigs, cows, ponies. Crates of vegetables and pies. The grange in PA is one of the few left where people stay over in tents on the property. The waiting lists are so long that the tents are willed to the next generation to keep hold of them. My father's mother shared a tent with her sister. People would build out the tents to have working showers, kitchens, porches. They pimped that shit out. And it was terrible-fabulous.

I will allow 2013 to be the year of Emerald if for no other reason then it means I can imagine an endless bike ride in the middle of nowhere every day. I will not allow that Pantone had anything to do with getting me there.
Posted by Michael J. Wilson at Monday, February 25, 2013