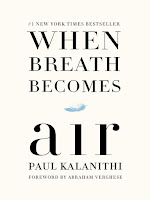 This isn't about this specific man's life or death.

I know little about either, though his story has been all over various mainstream media outlets, I've actively only read the bare facts. I have little interest in stories that fall into the 'human interest' category. The kind of thing that is discussed in hushed tones on the Today show. I have little interest in these stories beyond the headline and one sentence break down.

These kinds of stories are culturally woven into us. Many people enjoy clicking on the links to stories about the person who saved the dog from the highway. The kid who was dead for a few minutes and what they saw there. The person who raised a ton of foster kids being thrown a big party.

We are drawn to tales that highlight our humanity. Our best selves. This is how we've ended up with a book published 10 months after a man's death topping the bestseller list.

It is important to note that Paul Kalanithi was neither a 'known' person nor a writer before his diagnosis with cancer. It's important because this book exists because of that diagnosis, and the marketability of it as a 'story'. The newly graduated doctor in his 30s suddenly realizing that his priorities are off that his life is actually at its end. What does he do, and by extension, what would we do.

I feel like I must defend myself from imagined readers up in arms over me trashing this dead man's book. Which, I'm not. By all accounts the book is an interesting look at being young, and educated, and expecting of a long life only to have it all thrown out the window by a diagnosis. These kinds of stories are important. They teach us something about what it means to live every day, what is important.

So no, I'm not going to trash this book.

I'm more interested in the posthumous book as a cultural trope.

We put a lot of power into 'last thoughts'. The final breath before leaving this world. Call it a religious hangover in a secular society. And yes, I know, that is debatable, but...

Why do we do this?

Is it an attempt to see the other side before we get there? Those who are very ill, who are near death, are thought to be - to quote from Tony Kushner - "at the very threshold of revelation." They can see into some space we, the healthy, cannot. Supposedly.

There is a whole genre of books by the dying. To the point that it is a morbid cliche that a diagnosis, especially in youth, can net you a book deal if you can write about your illness in an enlightening and comforting way.

We don't want a book about how fucked up being in your early 30s and dying is. We don't want to see you suffering, unless that suffering can somehow teach you, and by extension, us how to live better lives. We need a cliched 'happy ending' tied up in your tragedy. You, who are dying, what can you tell us about living better since you will not.

Oliver Sacks was a fascinating man. Culturally, he held this space that I would liken to Neil deGrasse Tyson or Bill Nye. He was a pop intelligence. A man who could make big ideas feel close, small, relatable. His post-death collection of essays, Gratitude, was published only months after his death in 2015. This quote sums it and my point up nicely:

“My predominant feeling is one of gratitude. I have loved and been loved. I have been given much and I have given something in return. Above all, I have been a sentient being, a thinking animal, on this beautiful planet, and that in itself has been an enormous privilege and adventure.”

I want to be careful. It is tempting to classify these books as a sort of grief-porn. And they do fall in to that vein. Even the best of this genre of books will play with that emotion. They are, at their base, meant to make us sad. Make us think about death and life and our choices. They are reflective, and thus, they are about feelings.

A feeling we don't talk about much. At least, not in western culture.

Joan Didion has made a strange shift at the end of her career. She is now the oracle of death. And while her writing has always had the air of melancholy and reflection, it has now become full-blown sermonizing on the topic of endings.

Her duo The Year of Magical Thinking and Blue Nights are, if anything, elegies/eulogies. She has somehow survived death, though I would argue that many readers/fans/literati believe these two books to be her final books. There is an air of 'the end' about them.

Even though we all experience death, we somehow need a Joan Didion, a Oliver Sacks, a Paul Kalanithi to explain it to us.

These books become our coping mechanism.

We don't allow death into our lives, so we ask a great penance of those who can access it while still with us.

You, who are dying, tell me how to live.


Sellers is my attempt to examine what books are topping the best-seller list and why. To talk about and understand the trends in popular writing.
Posted by Michael J. Wilson at Monday, April 04, 2016