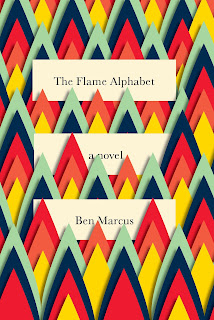 Peter Mendelsund is an associate designer for Knopf. Knopf is a part of Random House and well known for the quality of their book design. You can see his influence across the subsidiaries: Vintage, Doubleday, Knopf, Random House and Pantheon.

He helped in the recent redesigns of Dostoevsky and Nabokov. And he designed the now ubiquitous covers for Stieg Larsson's books.

His aesthetic of bold, clean lines with simple color combos is represented in books by Camus and many other titles, including an amazing line of Kafka reprints.

Mendelsund plays with old illustration tropes. His designs are flat, graphic, brilliantly colored. With Flame Alphabet we have a cover that resembles cut construction paper.

Children do it every day.

The repeating geometry of the cover brings to mind tessellations, fabric design, origami. In the Peabody winning film Between The Folds filmmaker Vanessa Gould introduces us to Thomas Hull and Erik Demaine. They are two mathematicians who use origami, one to teach, the other to solve and create art. Demaine's work is in MoMA's permanent collection:


In the same documentary we are shown work by Paul Jackson:


Origami was raised from craft to art form by Akira Yoshizawa. He took it as his life's work to represent life in paper. Before him origami was mostly used in games and making simple toys. After, it was art.

Paper art has recently grown in legitimacy in the world of fine art. There are ornate paper sculptures and cut paper designs showing up in galleries all over the place. Kara Walker has filled spaces with murals large and small: 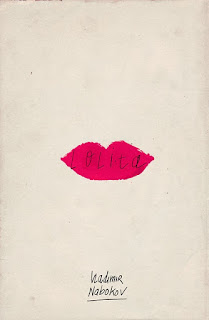 Mendelsund has an active web presence. He is on twitter and runs two blogs.

On his main blog he discusses the art behind cover making. His unfinished two part examination of Lolita covers is fascinating and thoughtful and worth your time. His pick for a good Lolita cover is this contest entry by Emmanuel Polanco:


Dust Jacket is a sometime article about the design and art of book covers. The idea is to shine a spotlight on the work of the designer separate from the author. Literally judging a book by its cover.
Posted by Michael J. Wilson at Monday, April 02, 2012