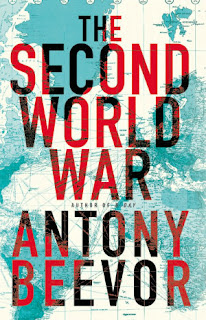 Steve Marking is the current art director at Orion Books. He previously worked for Penguin UK as a senior designer. His credentials are on point.

This cover is pretty spectacular. If you've been reading Dust Jacket for any length of time you know that I clearly love me some text-based design. In fact, this cover is so very similar to the cover of Orphan Master's Son that I almost didn't pick it.

But it gives me the chance to discuss maps, which are a huge love of mine.

The earliest map we have is the Babylonian Imago Mundi from 600 BCE. The clay tablet shows Babylon at the heart of a seven-pointed star of islands. The accompanying text describes three of the islands:

This map is beautiful for its simplicity. An attempt to place the self in the broader world. To contextualize. This is the first reason I love maps. They take the wilds and make them feel like home. If you can know something you can be master of it.

This may not be beautiful when you start to project from the statement, it is a beautiful sentiment. That you can know something by laying it down.

At their base level maps are simply lines. The flowing lines of nature and the grid of man. At times they can be completely hypnotic and surreal:


I mean. Look at that. You want to drown in it. Cover your walls, become obsessive. I understand people who never leave their apartments and fill notebooks. They are drawing that.

And it is real! 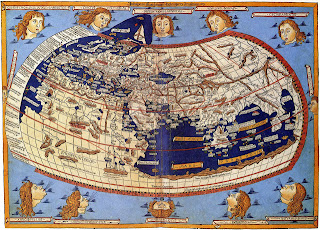 On the other end of the spectrum are the maps where things are just crazy.

To the right is a 15th century engraving of Ptolemy's description of the world. It was printed only a few years before Columbus' first voyage. Nothing is real. It is manic, full of strange locations, and the world is a smooshed mess. But it is magical and it was the standard for 1000 years. Imagine believing that the world looked like that. What it would feel like.

The drawings around them are amazing and fun to look at. Modern maps have given way to too much realism. I want a little of that magic back. Which ties back to our cover. By simply adding the text that map becomes more than a detail of the Atlantic Ocean. Something ominous begins to hover over it. Something dark.
Click the caption to see that in full size. It is amazing. You will spend hours with it. Modern satellite imaging has shown that many of the locations of the sea creatures and monsters are actually locations of weather patterns and known storm areas. So the threat was real. Imagine weather patterns represented by monsters.

Today's forecast is for dragons over the plains and serpents along the eastern seaboard.

Dust Jacket is a sometime article about the design and art of book covers. The idea is to shine a spotlight on the work of the designer separate from the author. Literally judging a book by its cover.
Posted by Michael J. Wilson at Wednesday, October 24, 2012