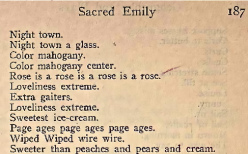 The first thing my mother always asks me when she reads a poem of mine is 'What does it mean?' or she will single out an element and ask what it means. What so-and-so stands for.

I never know how to answer her. She's asking a basic question. She wants to see into the metaphor and imagery that I'm using. To see with the same eyes. But most of the time a cigar is a cigar and there isn't much to add. In fact, I would argue that while we can discuss 'deeper' meanings all we want, at the end of the day most things mean exactly what they appear to.

I come into this problem head long when I attempt to pull together a manuscript for competitions. Here my problem is one of overview. The long count. The career statement.

And I get hung up on it a bit. The what thing follows what question.

My current manuscript is a conglomerate of three. Which were themselves successors to other, older attempts. The first was called A Map of Longing. It was an examination of childhood told through poems about loss and death of elder family members. It was sad.

The second was an abandoned project on the life of Nikola Tesla that was called He'll Be A Child Of The Storm, No Of Light. It is something I am still interested in and will someday go back to, but it will be much longer. More involved, and probably use some prose. 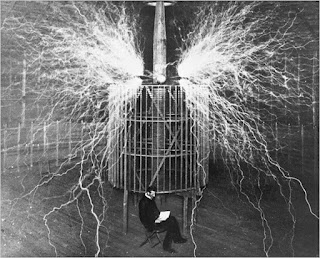 The final manuscript was my 'hits' package. It was called Museum of Natural History and combined my word-a-day poems with poems about trees, science, and some of the death stuff from Longing. There were also poems about a fictional break-up that were told through the history of locations they go to. This manuscript also featured all of my poems that have been published.

None of them felt whole. So I've smooshed them together. Cutting some poems, adding others. I've left in the published work, but one of them may go.

But that's a perfect example of my problem. I don't know if it should. I have stared at this thing for days. Thought about it. I don't know if the poems should alternate in trios or if I should section the whole thing off.

I have gone back to my college method of dealing with it. I printed the whole thing out and have it spread on my floor. The pages facing the light of day. Hanging out together. It's a hot mess since I'm also packing to move 2,000 miles THIS WEEK!

All of this is to say that A) I am working on my poetry; and B) I have no fucking clue what I'm doing.

Email ThisBlogThis!Share to TwitterShare to FacebookShare to Pinterest
Labels: gertrude stein, history, myself, on writing, writing