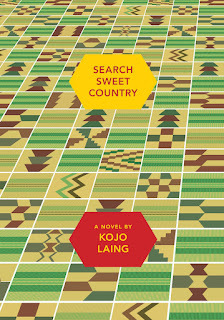 This is a 25th Anniversary edition from McSweeney's. Brian McMullen is their head artistic director. He also oversees their new children's book division.

The book is set in Ghana. This is important as a starting point for the image on the cover. It is clearly an African textile print. Almost to a generic point. 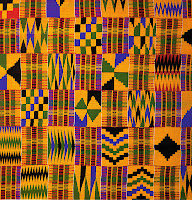 These printed fabrics are beautiful. It is an obvious reference point when dealing with a book that has been called "one of the greatest novels ever to come out of the African continent". The cover is even more important when you consider that the book follows a large cast of characters.

Bringing to life the bustling markets and bars in dizzying, lyrical prose, Laing weaves a story filled with bizarre and often melancholy characters...Their collective narratives create a portrait of a country where colonialism is dying, but democracy remains elusive.

Of course McMullen chose to render the fabric in soft greens and browns. Tilted away from the viewer. Softly fading into the horizon.


It's a visual trick that makes it both cloth and farm land. A simple trick, but genius on McMullen's part.

Photos like the one above have always been mesmerizing for me. The weird perfection of our division of space. The OCDness of it. African cloth is just as oddly perfect. The little squares with their conflicting yet harmonious content.

This is the best visual metaphor for writing I have ever seen. Not just for this story, but all stories.


Dust Jacket is a sometime article about the design and art of book covers. The idea is to shine a spotlight on the work of the designer separate from the author. Literally judging a book by its cover.
Posted by Michael J. Wilson at Wednesday, November 07, 2012