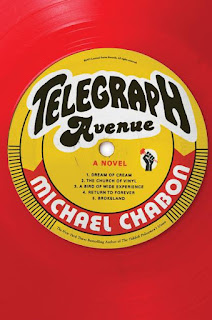 It says a lot that Michael Chabon's publisher, Harper, has pumped more than $250,000 into marketing his new book. Some of those marketing dollars are going to open a pop-up record store in Oakland themed after the one he writes about. A lot of the rest seems to have gone to the special e-book edition:

"an interactive map of Oakland, eight videos of Mr. Chabon, a playlist created by Mr. Chabon, an animated cover, audiobook clips performed by actor Clarke Peters from "The Wire," and a "Telegraph Avenue" theme song composed by Peter Lerman."

If that sounds like a lot of gimmick for a novel, I'm with you. Also, eight videos of Chabon!? Doing what?

The basics are thus: Archy and Nat own a long-suffering record store in Oakland. Things are made worse when a superstar football player decides to open a huge record store nearby. At the same time Archy's junky ex-Blaxploitation film star father shows up because he is trying to blackmail a city councilman. Archy's until now unknown 14-year-old son also pops up and starts a friendship/sexual relationship with Nat's son. Archy's wife, Gwen is pregnant, a mid-wife, and has a run-in with a doctor that quickly gets heated.

The plot is a seems more convoluted then it is. Chabon is clearly attempting to write a Quentin Tarantino movie. He even references the director a lot and goes to pains to describe a few scenes from Kill Bill. He's aiming for that feeling of overlapping narrative, of threads weaving a whole, it comes across more like blatant ass-kissing.

The reviews of this book have all spent a lot of time discussing how great an author Chabon is. They wax on and on about his writing ability and the beauty of his prose. They all say they have problems with the book, that it is not 'perfect' but they all also say that they give him a pass because he's just so good!

It just isn't. The writing is sloppy. His attempts at writing in a musical style are irritating. His endless music and film referenced tossed into dialogue are distracting. The 12-page sentence that makes up one chapter is not creative, it's tedious. Car doors have 'lamentable lamentations' that sound like the 'gate on a crypt filled with vengeful dead folks'.

And 'From the lowest limb of a Meyer lemon, a wind chime searched without urgency for a melody to play.' It is overwrought and trying way too hard to sound interesting. It comes across like a dad at a high school party trying to be into the Lady Gaga's and Rihanna's that the kids love so much.

This isn't even discussing the questionable racial politics he plays.

The book is centered on a black family. The husband is cheating on his pregnant wife. He does it twice. The pregnant wife is portrayed in the book in mostly angry ways, she is either shouting or grumpy the whole time. The 14-year-old is having a homosexual relationship that he refuses to acknowledge because he 'isn't gay' he just likes to fuck the white boy.

The minor black characters are; an NFL star, a deadbeat junky, a fading Blaxploitation star, and a hand full of older jazz-heads who talk a lot about Mingus and Davis.

I have no issue with a white man writing black characters, but this is a grab bag of stereotypes. I think, he was trying to play with that. I think he failed.

On page 48 of the book Gwen catches her husband talking to a woman in a restaurant. Flirting. He follows her outside and they argue. She accuses him of cheating. He lies and says he isn't. In broad daylight she shoves her hands into his pants where 'Her fingers found the heavy coil of hose'. This is what follows:

"Her fingertips were briefly snagged by a film of bodily adhesive as weak as the glue on a Post-it. She tugged her sticky fingers loose, brought them to her nose...Market stalls, smoking braziers, panniers of lentils. All the spice and stink of Ethiopia: turmeric, scorched butter, the salt of the Red Sea."

Again. I THINK he is trying to play with the tropes of racism and the language of Blaxploitation and Tarantino. I dare anyone to read that quote, realize that it is a white author talking about black people, and tell me that it works for them. This is just one example, the worst in my opinion. He goes on to describe several black characters in various spice and earthen terms. A white woman is described as smelling like 'rose perfume'. My eyes fall from my face and roll on the floor.

This is before Barak Obama shows up to offer marriage advice and call a jazz trio 'funky'. The novel is set in 2004. In Oakland. The section is from Obama's perspective. It's odd and makes zero sense. You are pulled from the story and slammed into election year 2012.

This passed a cadre of editors, PR men, lawyers, etc...and they decided to throw $250,000 behind it and tart up the ebook. I'm not saying that it was to distract us, but all the reviews mention it. And so far they all say the book is flawed but Chabon is just so damn good it doesn't matter.

Sorry. It may be an attempt at something, but it ain't good. If this works for you, I'm interested in knowing why. And I want to know in terms other than Michael Chabon once wrote a good book so this one also must be good.
Posted by Michael J. Wilson at Monday, September 10, 2012