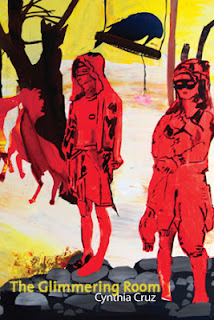 Coldfront put Cynthia Cruz' The Glimmering Room at number 21 on their Top 40 of 2012. In the write-up Melinda Wilson wrote that:

'Images of destruction, death and illness dominate the pages of Cruz’s collection. Some poems also hint at sexual abuses...Cruz’s is a world of abuse, drugs, sex, poverty and desperation. Somehow, though, the poems yield beauty...'

Wilson then quotes Notes on the Disaster in full:


Tore the plastic tubes from my arms.
I still have the scars and I walked
Right out of that place. I say
If I’m going down, then I’ll do
The killing -

To say Cruz' book is brutal is the worst kind of understatement. Language fails at describing the experience of Cruz' world. There is implied sexual harassment. Drug use. Death. The people talked about seem to be teenagers. Young. They live in a strange crack house like world. You are never sure where it is, but it is everywhere.

Last week I posted her poem Breaking Glass. I did this mainly for the last three and a half lines:

That warm slop of honey,
Seeping. No way to stop it
and its gorgeous hurricane of bees.

That sound of bees. I can hear it throughout Cruz' book. This constant menacing hum. One that probably will not yield honey, though it is implied it may.

The structure of Glimmering Room is one of repeated Strange Gospels. The gospels tell the story of a narrator and her friend Billy. There are 11-year old prostitutes. Billy eventually dies, though she comes back a few poems later.

Wilson calls the poems a sort of waste land. She isn't talking the T.S. kind. She's talking the Detroit kind. The vacant falling apart America kind. The not taking care of our shit kind.

The book opens with this quote from The Gospel of Thomas:

It is clear that Cruz is clearing her plate. Metaphorically bringing what is within her. Purging of these tales, mentioning these things, makes them less poisonous. Begins the moment of discussion on them, thinking on them.

It is horrifying and it is gorgeous. One of the most vicious books of poetry I have ever read.

I would have put Cruz much higher up on the list.
Posted by Michael J. Wilson at Wednesday, February 06, 2013