The meme is hardly a 21st century phenomena, though the word originates with Richard Dawkins in his 1976 book The Selfish Gene. At its core, a meme is an idea that spreads until it is ubiquitous. They are useful in their carrying of cultural knowledge, norms, even news.

Meme is a shortening of the Greek mimeme - 'something imitated'. Good examples of old memes are teaching games for learning to tie your shoes, or Ring Around the Rosie. Dawkins intended the word to describe evolutionary principles in the spreading of ideas. Today we use it to talk about the weird repetitive jokes on the internet. 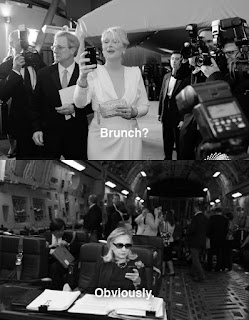 And while they are frivolous and silly, they still connect and convey information across great distances. They are still sort of doing their original job. It's just that they are now doing it through the many ways Michelle Williams has been dissed over the years. Are we teaching each other how to survive the plague? No. But we are disseminating cultural baggage.

Into this discussion steps Susan Wheeler's book, Meme. Published by University of Iowa Press in 2012, Coldfront placed it at 16 on their year end Top 40.

The book takes stock phrases, sayings, jokes, and places them along bits of conversations taken out of context. Wheeler uses these selections of dialogue to craft strange elegies. To her failed marriage, to her recently dead mother, to herself.

The poems read like the leftovers from these relationships. The strange magnetic echoes. Like remembering a smell. Or touching the surface of something and having a flash of memory. It is broken, and haunting.

The poems are named Canasta, Turkey in the Straw, Jeehosaphat. Here is Ten Conniptions:

If you don't knock it off now there will be no cake for you. You're
skating on thin ice.

That's it. That's the last straw. You get down off your high horse,
young lady, and shape up or ship out.

Can I pack your bags?

At times the language gets difficult to take in. The endless barrage of 'momisms' and pat phrases begins to make your brain glaze over. The effect is something akin to a scolding from a parent. But a strange one; one that you wanted to happen. 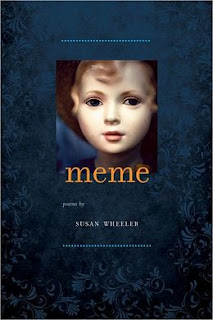 I liked the book, but mostly found the poems to be forgettable. This is the problem with memes in general. The ephemera quality of them. We remember things like 'pot calling the kettle black' but they sit idly in the back of our mind until we are reminded of them.

Wheeler's book is interesting. Her use of these well known phrases forces us to reconsider them. To rethink the language of them. In the context of a poem like Ten Conniptions these phrases begin to sound like a collective childhood. I'm not sure they become more than remembrances though.

Wheeler was a finalist for a National Book Award. I agree with Coldfront's John Deming, 'its sub-current of autobiography–the poet’s and everybody’s–alongside a barrage of sometimes-recognizable phrases will leave you with a ghost in the room.' I just don't know that the ghost wasn't already present.
Posted by Michael J. Wilson at Friday, February 08, 2013