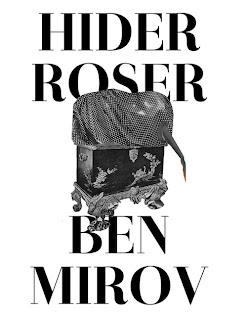 for I have no idea

I have an uneasy truce with surrealist poetry. My interest in what's going on on the page dwindles as the language looses meaning.

Pretty soon you have a loft
and people are getting to know your work
rearranging the letters in horse rider
you get hider roser, which means something
you will never understand
with only a few minutes left
one end of the hose going into your head and the other
going don't know where

There is an obvious play of growing fame and what it is worth at play in Mirov's second book. Each poem has a sense of sadness in it. Oddly buried in with the shifting meaning of the language.

That sadness has always been the key that lets me enter Mirov's work.

You want to write about a horse
but you have written hose.
Think of meat.
Meat thinking of jogging.
Meat going out on a date to see the water.

The image is hilarious and magical. Like the best of Wallace Stevens or even Rimbaud this book hums with wit. It's also filled with doubt. The book ends with Ribbon:

In the final stanza Mirov addresses that key I was talking about. It is apparently also his:

If you're still listening,
put this somewhere safe.
Throw away the key.

I think the key is more than I ave discussed. Mirov is speaking a secret language. One to himself. He is making a journal. It is clearly meant to reveal all but in coded lushness. It is confession as unconfession.
Posted by Michael J. Wilson at Monday, February 18, 2013