Sellers : The Rainbow Comes and Goes 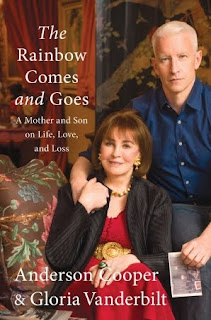 The Rainbow Comes and Goes
Author: Anderson Cooper, Gloria Vanderbilt
Publisher: HarperCollins (4/5/16)
304p
Thoughts on Anderson Cooper and Gloria Vanderbilt?
This is the type of saccharine book that you give to people when they are seriously ill or they are retiring.
But that's not what I want to talk about.
The basic premise of this book, where a mother and son talk frankly about their lives, is one that can be fraught culturally. Throw in that that son is also gay and there's probably some negative stereotypes already on the tip of your tongue.
Sigmund Freud coined the 'clinical' term for the negative trope - Oedipus Complex. In Freud's hyper-sexualized (and frankly broken) world-view a man who loves his mother beyond childhood is viewed as removed from a healthy mental state. Here is a man who can never actualize himself. He will never find, most importantly, heterosexual love. He will be stunted. A eunuch. Stripped of his 'he-ness'. You might as well chop off his dick, it would be less embarrassing.

Think about Norman Bates and his cross-dressing. The trope of the gay man who wanted to wear his mother's clothes instead of date a woman. These things lead to a stigma placed upon any man who dares to love his mother. These are the dark things lurking behind Freud'd legacy.
This view has wormed its way into society as a whole to the point of being nearly universal. Think of all the boys told not to hug or kiss their mothers. The fathers who tell their sons to not cry. To not show emotion.
And it has deformed society.
From men who view women as objects of desire/ownership to cultural limits placed on 'acceptable' forms of masculine affection, the damage is very real and ongoing. I would argue that it is the root of many real-world issues that surround sex, sexuality, and gender.
The shame placed on the very idea of the 'mama's boy' is one that needs to be broken. Healthy, loving relationships between parents of all genders and their children are not only ok, they are desirable. And while this book isn't a revelation on the subject (it isn't even about this topic) it is making a dent in the idea that a grown son cannot have a close relationship to his mother.
And the work subtly acknowledges this. From the description:


Though Anderson Cooper has always considered himself close to his mother, his intensely busy career as a journalist for CNN and CBS affords him little time to spend with her. After she suffers a brief but serious illness at the age of ninety-one, they resolve to change their relationship by beginning a year-long conversation unlike any they had ever had before. The result is a correspondence of surprising honesty and depth in which they discuss their lives, the things that matter to them, and what they still want to learn about each other.

Hidden in there is the small detail of them making the decision to change their relationship. To become closer and to reveal themselves to each other. A sort of grown-ass conversation that everyone should have with anyone who cares.

Now, some don't have this access to their parents. And it is certainly worth noting that this kind of clarity is not necessarily important to parent/child relationships. But the idea that this closeness is undesired is one that needs to be broken down and rethought.


Sellers is my attempt to examine what books are topping the best-seller list and why. To talk about and understand the trends in popular writing.
Posted by Michael J. Wilson at Monday, May 23, 2016