I'm going to revive THIS! my Friday list of things that were catching my interest for the last week. I will be up front on this - it may not happen every week. 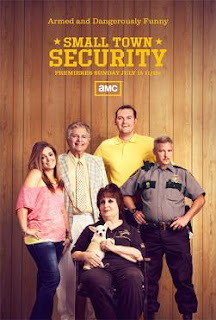 This show is so insane. I cannot even explain it. It aired on AMC after Breaking Bad from 2012-2014. The premise for this unscripted show is really simple: a small town security firm owned and operated by Joan Koplan in Ringgold, Georgia is followed by cameras. The end. It's a basic weird workplace reality show, except...it's really REALLY weird.

Joan is basically Roseanne. Except even less likable, but that somehow makes her more likable? And she has a series of tiny dogs. And battles cancer and other illnesses that dominate the third season.

Joan's head of security is Dennis Starr Croft. He lives in the office. He's a transman, which is revealed early in the first season. This is one of the lease interesting things about the show but the handling of his trans status is treated with compassion and amazing nuance. He goes on dates. He discusses surgery. He deals with bigots.

Joan's husband Irwin is there too. But he basically wonders around in the background and goes off and does the strangest things imaginable. Like manage a roller derby team or become obsessive about mini golf.

The weird sneaks in in the surreal, almost Twin Peaks moments of just...oddness. Irwin roller skating backwards while humming as a disco ball fills the strangely red space with points of light. One episode begins with the security team in a shoot out using machine guns, but it's Joan fleshing out the plot to a new training video. The original McGruff the Crime Dog actor comes to help them reach out to children, but due to copyright they can't use his name or let him speak while in costume...and the final episode involves Dennis' theory that Joan is actually an alien sent to earth to save us...I mean...come on.

Only season 3 is on Netflix, which is a crime against culture, but you should still watch it. 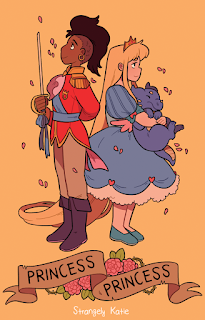 Princess Princess tells the story of Princess Amira and Princess Sadie. It begins as a traditional Disney-ish fairy tale. Girl in tower needs saving, other girl saves her. It quickly dovetails into a tale of two princesses kicking ass, saving the boys, and falling in love. And it is a great representation of two kinds of femininity.

It's beautifully drawn and so awesomely cute that it hurts. It's available for free at the link above or to purchase (which you should do - support queer artists) on Amazon.

Katie's Tumblr is also fun. Give her some love.

Arnold Lobel's classic children's series about amphibian best friends began in 1970 with Frog and Toad are Friends. Between 1970 and 1979 4 books would be published, all amazing and wonderful and so so so worth revisiting. They are about love and friendship and just goodness.

Lobel came out as gay in 1974 at the height of Frog & Toad fame. He kept this mostly a secret from the general public, which, as a children's author was probably smart in the 70s. He died in 1987 from an AIDS related heart attack at the age of 54.

The New Yorker just ran this amazing article by Colin Stokes about Lobel and his sadly forgotten biography. But the article puts for a shockingly simple idea - the Frog & Toad stories are about same-sex love. A relationship that is presented as platonic, obviously but take a look at this plot summary from the article:


Take, for instance, the story “Alone,” from “Days with Frog and Toad,” in which Toad goes to Frog’s house to visit him but finds a note on the door that reads, “Dear Toad, I am not at home. I went out. I want to be alone.” Toad begins to experience a little crisis: “Frog has me for a friend. Why does he want to be alone?” Toad discovers that Frog is sitting and thinking on an island far from the shore, and he worries that Frog isn’t happy and doesn’t want to see him anymore. But, when they meet (after Toad falls headfirst into the water and soaks the sandwiches he’s made for lunch), Frog says, “I am happy. I am very happy. This morning when I woke up I felt good because the sun was shining. I felt good because I was a frog. And I felt good because I have you for a friend. I wanted to be alone. I wanted to think about how fine everything is.” In the end, the trials of their relationship are worth bearing, because Frog and Toad are most content when they’re together.

And sure, you could say this is a reach, but seriously, go read these stories again. They are about the strong emotional ties between two male characters. And it's kinda revolutionary when you begin to think about it in context to a society that has a hard time letting boys feel anything, let alone love for another male. 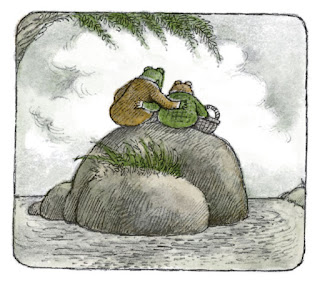