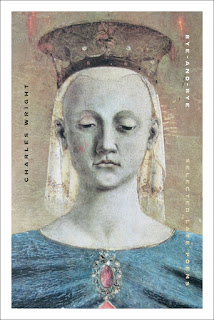 Religious iconography is always fascinating. The faces glancing upward in fervor or down in reflection.

I often find myself at museums wandering aimless through the galleries of old relics. The altars that open to reveal triptych of faith, death, heaven or hell itself. All painted in fading colors on thin veneers of wood.

Each layer of paint seemingly easy to peel. The wood separating at the edges. You could imagine taking the tip of a finger and picking at the parts until some came off in your hand. What would that feel like? That ancient wood and pain sitting in your palm.

This is what I think about in these galleries.

That and the strange devotion to something that would lead to the objects being created.

One of my favorite examples is the Chapter House at Westminster Abbey. It is an octagonal room built in the 1250s. The ceiling is vaulted and very high. It looks like a circus tent. The floor is a rare complete 13th century tiled pavement. Covering the walls are murals depicting the Apocalypse. They date from the 14th century. 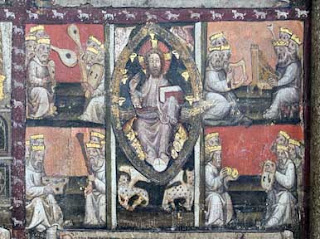 The effect of standing in the room is to feel like history is arbitrary. That there is no reason for one section to carry over for generations while another fades beyond memory.

This is what I think about as I walk around the objects amassed in museums. The cases of Mary's with child. The gilt halos. I think about what other objects vanished. What remained and why. And I wonder what will remain from today. From me.

There are great examples of religious art. Goya. El Greco. DaVinci. Earlier works like the Chapter House murals. These things are from a time where the Christian god was very very real. Was feared. Was held at bay and worshipped through these works and others like them.

To see them held in cases. Stripped of most of their power. Left with only aesthetic.

The cover is the center panel of an altar. The full panel has a very different feeling than the close-cropped version of the book jacket.

Here what we interpret as a sad woman reflecting on life. On religion. On the poetry within. Here she is a giant, triumphant. Welcoming the masses into her cloak of protection. She is Mary, mother.

What's interesting is that I'm not sure which version I like more.

The washed out one in close from the cover is interesting because of the introspection. The larger, true painting, is interesting for the strength and the message.

This reminds me of when J and I went to see Tatzu Nishi's 'Discovering Columbus'. Nishi built a living room around Gaetano Russo’s 1892 statue of Columbus in Columbus Circle. 70 feet in the air, you came face to face with this: 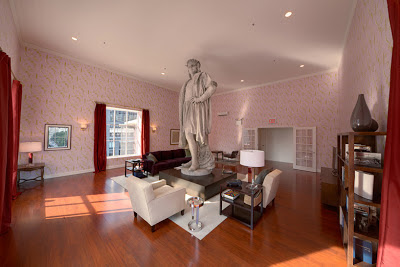 Suddenly the city around me, the statue, the man from history classes - they contracted. And all I could think about was his jaunty pose. One hand on hip, smirking across space and time. The chopping of the rest of the monument, the cutting off of the noise of the intersection. It changed the work. It made it mean something else.

This is why I walk the rooms full of religious artifacts. Because those cases of things make it all mean so much more.

And so much less.

Dust Jacket is a sometime article about the design and art of book covers. The idea is to shine a spotlight on the work of the designer separate from the author. Literally judging a book by its cover.
Posted by Michael J. Wilson at Monday, March 04, 2013