The Rings of Saturn

These are the rings of Saturn.

From afar they look like solid bands that diffuse as they move further from the planet.

In reality they are more like sand. Small bits that form a whole. They are Concentric orbiting particles of ice. There are a sum of parts.

In 1995 W. G. Sebald wrote The Rings of Saturn. It is a "novel" about a man named W. G. Sebald who goes on a walking tour of Suffolk. In each of the 10 sections Sebald discusses a leg of his trip. In doing so he meanders away from the location he is describing to talk about all of the small things that make up the whole of the area. 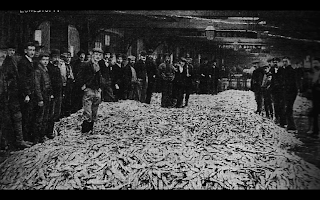 He talks about silk worm cultivation, Thomas Browne, rich shut-ins, and the history of the houses he passes. There are photos like this odd one of a fish catch in the North Sea. There isn't really a narrative. The narrative is the accumulation of things.

He talks about the town of Dunwich which faced a giant hurricane in 1286. Thus began a constant cliff erosion that slowly took the whole town into the sea. The last of the ancient buildings, All Saint's Church, went over the edge in 1922. At present one grave still stands about 15 feet from the edge. That of Jacob Forster.

Suffolk is where I grew up. I was born in Mildenhall. My family lived in Bury St Edmunds. Bob Hoskins is from there. He recently retired from acting because of his continued battle with Parkinson's. Hoskins is most well known in the US for Who Framed Roger Rabbit and Hook. When my family moved from England to the states the Super Mario Bros. movie with him and John Leguizamo had just come out.

It was the first movie I was allowed to go see by myself. I went with this kid we met in a hotel before we moved into our Air Force housing. I didn't really like him. I hung out with him because I felt like I didn't understand America enough to do it without someone. The movie is terrible. But Dennis Hopper gets to chew the hell out of every piece of scenery so it's a win.

For the soundtrack they managed to bring together the following: Roxette, Marky Mark, Divinyls, George Clinton, Extreme, Megadeth, Joe Satriani, and Queen. The Roxette song featured on the album, Almost Unreal, was written for Hocus Pocus.

Hocus Pocus may be one of my favorite bad early 90s movies. One of my others is The Witches. Both are campy and hilarious. My love of drag was pretty obvious. Dahl is easily my favorite children's author and The Witches my favorite book. I did a Re-Read post on it last summer.

In 1946 he wrote a short piece for the Saturday Evening Post titled The Mildenhall Treasure. The story concerned the discovery in 1942 of a large hoard of Roman silver buried in the 4th century. The whole area of Suffolk is well-known for the large quantities of Bronze, Silver, and Iron Age archaeological objects recovered.

Dahl's story is a journalistic piece about the discovery. He spent time at both RAF Mildenhall and RAF Lakenheath. The bases my father worked when I was born.

Between Mildenhall and London lies Cambridge. James Clark Maxwell was there from 1850-56. He left for Aberdeen University to become their chair of Natural Philosophy.

In 1859, attempting to beat his former school to the punch, James Clark Maxwell demonstrated that the rings of Saturn could not be solid or they would break apart. He proposed the rings must be composed of small particles. Maxwell's theory was proven correct in 1895 through studies of the rings carried out by James Keeler.
Posted by Michael J. Wilson at Wednesday, March 06, 2013