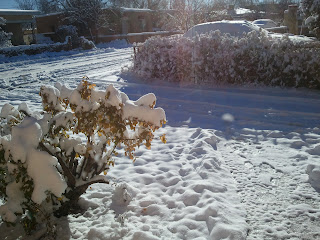 It did that outside this weekend! Which meant I couldn't really walk the streets looking for work. If you know what I mean.

Being unemployed is weird. You'd think I would spend my time writing up a storm. Instead I have watched a ton of Star Trek and Top Gear and read.

Which there is nothing wrong with.

But the time has just vanished. It doesn't help that we are moving into winter, with its long dark nights and late sunrises.

And it doesn't help that I am car less. In a new place. With limited resources.

The idea that time passes differently depending on your state of mind, etc. is not a new one. And not something I need to explain. It is observable.

He says that there is lack of archaeological evidence from those years. That Romanesque architecture in western Europe means that less than half a millennium could have passed due to weathering, etc. He also says that Charlemagne did not exist and was a construct of Otto III, who wanted so desperately to rule in the year 1000 that he had his scribes add 297 years to the calendar.

So it's 1715 and we are a long way off from the Mayan Apocalypse. And I can feel better about my lounging around. Or something.

What's strange is that I can see a ruler asking his court to invent time for him. I can see it working too. All you'd have to do is rule long enough and get others to follow suit. European politics is a fucked up land of nonsense and inter-familial marriages. They would totally conspire to make them all be rulers in the year 1000.

I mean Otto was king of Germany, Italy and the Holy Roman Empire, so it's not so far fetched.

Illig's theory isn't even the only one. Anatoly Fomenko has an entire rewritten world history to his credit. His 'New Chronology' has written history starting at 800AD and 'folds' all ancient history into the Middle Ages.

You can even buy the 7-volume re-history yourself. $10 a piece on Amazon!

All of this is to say. I'm clearly wasting time and not getting anything of value done. No working on novel. No poetry. No job.

And I am fine with it. I'll just edit those bits out later.
Posted by Michael J. Wilson at Wednesday, December 12, 2012