The Orizaba was built in 1917 by William Cramp & Sons Ship and Engine Building Company of Philadelphia, PA. It served in WWI and WWII. Named for Orizaba, Varcruz the name means 'valley of happiness'. 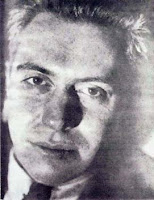 In 1931 Hart Crane went to Mexico on a Guggenheim Fellowship. He would remain there until April 1932, when her would take the Orizaba with the intention of going back to New York.

Hart Crane is a distinct New York poet. He is hailed and derided as the ultimate in Modernist poetry.

He lived in Brooklyn Heights in the late 1920s with his boyfriend. The view of the Brooklyn Bridge filled him with hope and awe. In response, he began to write a rebuttal to T. S. Eliot's The Wasteland, what would become The Bridge. A view that I have been inspired by many times. Will always inspire.

That poem, transcendent and strange, was received poorly when it was published in 1930 by Black Sun Press. Even today its place in our American 'canon' is often questioned.

The poem is about progress. A new, bright, American future. The 'great war' was over and America had come out strong and vital. The bridge was the ultimate symbol of that achievement. The growing pains were through, America was a grown-up country.

In 2006 Hart Crane: Complete Poems and Selected Letters was published. Writing in The New Yorker, Adam Kirsch called The Bridge 'an impressive failure. . .[that] varies wildly in quality, containing some of Crane’s best writing and some of his worst.'

I can't say I disagree. While I find the poem beautiful, it definitely leaves me with a sense of open-endedness. A sense that it was never fully realized. Sections of it crumble in your hands in a way Eliot never does. Perhaps it mirrors the fragility of its time. The 1930s were hardly the gold-coated promised land that people thought they would be. 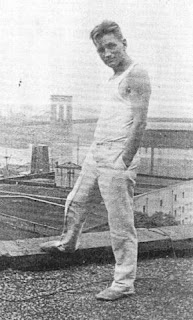 It uplifts, but it feels ephemeral.

Whitman's Crossing Brooklyn Ferry does a better job capturing a future bright with promise. I suspect that Crane's is a personal triumph. He was living with his lover, he woke to the bridge. It was a far cry from his Christian Scientist upbringing in Ohio. It was glorious. Understandably.

That it doesn't quite connect into a metaphor for the future America makes sense. There was another war on the horizon. A Great Depression.

And like Mishima, and countless other people around the world, homosexuality was also a dark spot. The reveling is magnificent, but the realities of the world find a way to enter back in.

This is familiar territory. The night before Hart Crane had hit on a crewman of the ship. Had been attacked. Had been humiliated. Crane, in pajamas and an overcoat, shows up on the rear deck. He was drunk. Had been drunk for years. He climbed the railing and maybe even said goodbye, then fell into the cold water. For two hours lifeboats searched. His body was never found.

Like Mishima, Crane had a clear love of aesthetic. He was a romantic. He was a visionary. He claimed that he saw the future. That it was bright. Like Mishima, he took a female lover, Peggy Cowley, who was the inspiration for The Broken Tower.

The two are vastly different. They are not parallels. But the closeted world of gay men in the history of the world is full of similar tales. Of elaborate 'masks' of the failed pick-up. Of the beatings and then the suicides.

The Brazilian navy took over the boat  that was called the Orizaba in 1945, renaming her Duque de Caxis. The boat was scrapped in 1963.

A counterpoint:
In 1934 Katherine Hepburn took a trip to Mérida, Yucatán. Once there she filed for divorce from her husband of 6 years, Ludlow Ogden Smith. She then vacationed in Havana and went home.

I don't add this as a comment on heterosexual marriages. How they are easy to enter/exit. I add it as an example of the intersections of lives/loves and how these dramas play out on similar stages. 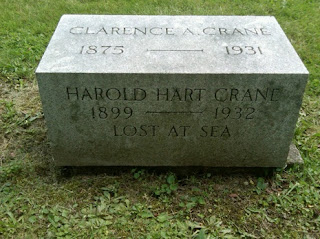