The Book of Nightmares 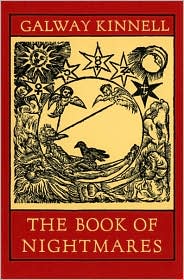 Somewhere behind me
a small fire goes on flaring in the rain, in the desolate ashes.
No matter now, whom it was built for,
it keeps its flames,
it warms
everyone who might wander into its radiance,
a tree, a lost animal, the stones,

because in the dying world it was set burning.

This is how the final section of Galway Kinnell's Book of Nightmares begins. What comes before and after is a harrowing and deeply dark journey through a strange wood. He recounts his daughter's birth, he dedicates it to her after he is gone and she is orphaned. The book in whole is dedicated to both of his children.

To call the book-length poem 'dark' is honestly to generalize what is going on. Nightmares was written in 1971 when Kinnell was 44. It starts with references to his young daughter and then veers into the Vietnam war and the civil rights movement. There are bears and fires and old crones drawing runes. The whole is buried in a Medieval feel. A sense of hearths and mud houses. Of black death and superstition.

He is equating our world with theirs.

It was this strange alchemy that drew me in from the first few words.

When I was 19 we had just come out of the Clinton years. It was a national high. I'm not even referring to the politics of the era, I was honestly an unengaged teenager and the time I lived in allowed that. The Clinton years were good for the country. We were seemingly prosperous, had come out of the 'culture wars' with new found tolerance (HA!) and were about to elect Al Gore President.

The 2000 election was not that election though.

The cynicism of a teenager mixed with the deep cynicism of the early 2000s is hard to explain. I think the US was in a fog post-election. Unwilling to really look at what had happened and deeply distrustful of the entire 'experiment' of American democracy.

The first section of the poem ends with:

And in the days
when you find yourself orphaned,
emptied
of all wind-singing, of light,
the pieces of cursed bread on your tongue,

may there come back to you
a voice,
spectral, calling you
sister!
from everything that dies.

And then
you shall open
this book, even if it is the book of nightmares.

I read those lines, and still do today, as an address to me. Telling me that even in the darkness there is a small fire, a voice. My own voice. The voice of others. And that will be what saves us.

I recently read Stephen Greenblatt's The Swerve (2011 Norton). The book details the rediscovery and re-distribution of Lucretius' On the Nature of Things after nearly being lost. The poem was written sometime in the 1st century. It was in wide distribution and is referenced in many other classic texts. By the 9th century the poem vanished and was forgotten.

The Swerve details Poggio Bracciolini's discovery in 1417 and the resulting spread of the text.

Greenblatt argues that Lucretius' poem sowed the seeds of the Rennaissance, and thus all of modern thought.

I don't know if I agree with him. But the poem spread like wildfire and espoused a decidedly secular view of the world. It even went so far as to deny god in creating the universe, to deny fate. It names atoms. It talked up the beauty in living for pleasure not pain.

It was not a 1417 kind of work and was banned, burned and tried to be put back in its box numerous times.

Ideas are hard to kill. The voice in the dark is a thread that leads to whatever warmth may be needed.

Kinnell meant his poem to be a modern take on T.S. Elliot's Wasteland. An attempt, however futile, to reconnect the world in a moment of upheaval. The Vietnam War and the civil rights struggle were tearing the country apart. The promises that after World War II things would be 'normal' again, would be 'better' had proven false. He retreated to the woods, to nature, to the occult. He tried to bleed himself of it.

In 2000 these words seemed like prophecy. Today, they seem even more prescient. They call from the past and want something from us. We are tasked with building a fire, with calling to those lost in the woods. With building a shelter and dredging the past.