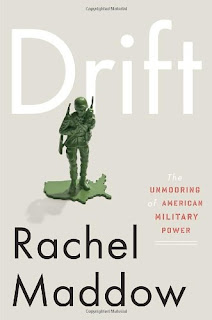 Maddow's book is a look at the drift of war powers from the US Congress to the President over the last few decades. It is a fast read and will expand a much needed discussion.

What concerns me is that when you look at the non-fiction best-seller lists over the last decade is that it is full to the brim with books by television personalities.

We seem to have traded historians and philosophers for talking heads and polemic.

I'm not asking for stuffy academic books with impenetrable footnotes. I just want a higher level of discourse.

Why, for instance, is Bill O'Reilly writing a book about the assassination of Lincoln? Granted, O'Reilly does have a degree in history and did teach High School for several years in the 1970s, but still. Why is he doing this? Why is his book the one that sits on the best-seller list for 31 weeks?

The current top ten has 5 books by journalists, 2 TV hosts, 1 former politician, 1 golf coach and 1 blogger. Five of these books are memoirs. Two are pop-science examinations of human actions. This leaves O'Reilly's Lincoln book, a book about President's by Time's Nancy Gibbs and Michael Duffy, and Maddow's book on US military policy.

Having only read Maddow's I would say that Drift and The President's Club are the only books that seem to want to spark discussion. The rest are mostly meant to strengthen legacies.

Is this a problem? The list has always been lousy with journalists. I suppose my main issue is that we have given over serious discussion to these folks that are really, for all intents and purposes, entertainers.

That word is scary. Serious. I, of course mean deep, real, more than cursory. Why does everything have to be entertainment? Easy? Sound bite filled?

There is a concept called Gamification. Essentially it is the idea that you can apply simple game rules to every day life to make it easier to slip in advertising, to control behavior, etc. More applicable is the idea that you can turn everything into a game. There are apps for everything. Banking is a game, you can watch your life go up and down every moment of every day. So-called services like Klout only add to this. They literally turn your online presence into a game. You get points for being talked about on Facebook, Twitter, Tumblr, and on and on. Each friend is a point, each click a point. The higher your Klout the higher your worth as a person.

The idea that we abandon serious discussion in favor of flashy personalities and pop-everything is just another part of this. We are gaming discourse. Somehow because they are in our living rooms nightly, Maddow and O'Reilly are 'experts' on things. We read about other peoples lives in an effort to know how to gage the one we aren't living.

Sellers is my attempt to examine what books are topping the best-seller list and why. To talk about and understand the trends in popular writing.
Posted by Michael J. Wilson at Monday, May 07, 2012