Sellers : Bring Up The Bodies 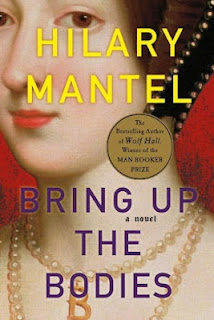 Historic fiction is nothing new. Shakespeare did it. The Iliad and Odyssey are a sort of historic fiction. The idea behind Hilary Mantel's Man Booker Prize-winning book Wolf Hall and this newly released sequel is nothing to get excited over.

What is interesting is that we seem to be culturally interested in the Tudors. In the Renaissance as a whole.

What is it that fascinates us? That leads us to create TV shows like The Tudors and The Borgias. Movies like The Other Boleyn Girl (which tells the same story as Bring Up The Bodies) and Elizabeth.

For me this time represents the first real breaks between church and state. Henry VIII broke with the Vatican and formed the Church of England. He set the stage for the Anglican church to be formed. In the process showed that Rome did not have to have sway with a country. That its wealth and influence was not the proverbial alpha/omega of ruling.

This idea that governments could run without the will of a Pope and thus also without the will of a god was shockingly new. Perhaps more so than is credited to it. Of course England still had the divine rights of kings for several more centuries and it really wasn't until very modern times that the monarchy gave over all control of government to the Parliament, but the germ of the idea was there.

Following Henry VIII we have Elizabeth I, who fascinates us for being a strong woman when that wasn't entirely looked well upon. She remained unmarried, she ruled sternly, she oversaw the budding of the British Empire and did it all while wearing insane clothing.

The Borgias of course are a scandalous rich family from Spain. Who ran things. All things. Two of their family raised to the Papal Seat. They openly fought with the Medici and Sforza. They were Dynasty, the actual meaning of that word and the actual TV show. We like them because we like soap operas, and real life ones even more.

We also like wealth and power and you could safely argue that in times of economic instability we cling to these images of ultimate stability. The great families that ran this show for centuries and didn't care who was stomped along the way.

That TV show, Dynasty, aired in the 1980s. A time of severe economic uncertainty, great divides between have and have not. Other shows of the time were Falcon Crest , Dallas. It is very telling that Dallas is back on our TVs this year. Women's clothing is starting to look a little Joan Collins-ish and we have looked back to 1400-1500 for inspiration.

In a similar fashion we are also looking back to the 1920s. Though filtered through the 1970s revival of the jazz age and the nostalgia for that time. The Great Gatsby film opens this fall and many fashion designers clearly took the styles as inspiration for their recent fall runway shows. The 70s were quite obviously a time of political, economic, and cultural strife. What does it say about us that we go back to the hard times over and over?

Sellers is my attempt to examine what books are topping the best-seller list and why. To talk about and understand the trends in popular writing.
Posted by Michael J. Wilson at Monday, June 04, 2012