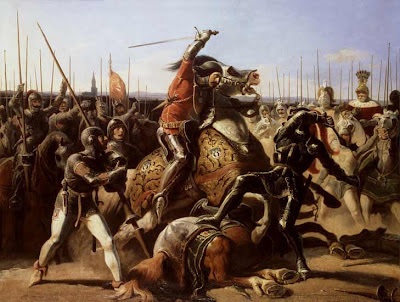 I went over the history of the war and the players in part one. There I touched on the image. How it plays with the central figure in black. Now I want to focus on the image and how it draws me in.

In Breitbarth's crop of the Dietz painting, the man in black takes center sage. The sky is shortened and what we see is a man about to hit a horse. Behind him are faces, watching intently. Are they an audience? Is the man in black the good guy or are they? The ambiguity alludes to the strange politics of the war itself, but the image is one that fascinates.

A lone warrior against unbeatable odds. No matter who is the 'good' and 'bad' one man against what appears to be an army are not favorable odds.

And this scenario crops up in dozens of films. Each time in almost identical ways:

The idea of the lone avenger. The ultimate underdog situation is hard to resist. Oldboy and Kill Bill are examples that are numerous. Look at most action films and this situation will come up at least once. Of course war would look more like this:

The David versus Goliath ideal is a natural draw. We want a savior, a sentry, someone who against all odds will come through. It doesn't matter who is good or bad really, we want the thrill of what will happen. The suspense. The idea that someday that lone warrior may be us.

That man in black will attack the man on the horse. The crowd of faces will stand for a moment in disbelief. Depending on the outcome of that initial face-off, that man in black may face that crowd. And it will be epic.
Posted by Michael J. Wilson at Wednesday, June 13, 2012