1. From Impossibility to Victory


Right up to the 11th of June, the Labour Party, the Liberals and the SDP were busy saying that Conservatism doesn't work. Oddly enough, since the 12th of June, they've been saying that it does. And so our political opponents are now feverishly packaging their policies to look like ours. And it's interesting that no Party now dares to say openly that it will take away from the people what we have given back to the people. Mr President, Labour's language may alter, their presentation may be slicker, but underneath, it's still the same old socialism. Far be it from me to deride the sinner that repenteth. The trouble with Labour is they want the benefit of repentance without renouncing the original sin. No way!

And the so-called "Alliance"? During the election campaign I used to wonder what the Alliance leaders meant by consensus politics. I have a feeling that, if Dr Owen didn't know it before, he knows now: six inches of fraternal steel beneath the shoulder blades. Mr President, we are a successful party leading a successful nation.

And I'm often asked what's the secret. It's really quite simple. What we have done is to re-establish at the heart of British politics a handful of simple truths. First, no economy can thrive if Government debases the coinage. No society can be fair or stable when inflation eats up savings and devalues the pound in everyone's pocket.

Inflation threatens democracy itself. We've always put its defeat at the top of our agenda. For it's a battle which never ends. It means keeping your budget on a sound financial footing. Not just one year, but every year and that's why we need Nigel Lawson. The second, men and women need the incentive that comes from keeping more of what they earn. No-one can say that people aren't interested in their take-home pay. If that were true, a lot of trade union leaders would be out of a job. So as economic growth has taken off, we've cut income tax. And as soon as we prudently can, we'll do it again. And third, as people earn more, they want to own more. They value the security which comes from ownership—whether of shares or homes.

Soon there will be more shareholders than trade unionists in this country. Of course, not all trade unionists are shareholders—yet. But I hope that before long they will be. Home ownership too has soared. And to extend the right to council tenants, we had to fight the battle as you know, the battle in Parliament every inch of the way. Against Labour opposition. And against Liberal opposition. Does the Labour Leader now applaud what has happened? Does the Liberal Leader welcome it? Surely, now that it's proved so popular, it must be the sort of liberating measure of which even he would approve. For years we Conservatives had talked about wanting to create a property-owning democracy. Looking back, I wonder whether we did as much as we should have done to achieve that goal. But I don't believe that anyone will be able, in the years ahead, to make a similar charge against this Government, indeed, extending ownership has been one of the achievements of which I am most proud. And fourth, it is our passionate belief that free enterprise and competition are the engines of prosperity and the guardians of liberty.

These ideas have shaped free political institutions and brought unimagined wealth to countries and continents. Just look at what we have achieved—low inflation; tax cuts; wider ownership; a revival of enterprise and, over the last year, unemployment has fallen at record speed by 400,000. And we want it to fall further. And with continued economic growth, it should. And our economic success has enabled Britain to play a more prominent role in the world at large. We are now the second biggest investor in the world, and the very model of a stable economy. And that's why Nigel Lawson has been able to play a leading role in helping to tackle the world debt crisis. International bankers, the finance Ministers of other nations: they all listen to you a lot harder when they owe you money rather than the other way round.

The old Britain of the 1970s, with its strikes, poor productivity, low investment, winters of discontent, above all its gloom, its pessimism, its sheer defeatism—that Britain is gone.
And we now have a new Britain, confident, optimistic, sure of its economic strength—a Britain to which foreigners come to admire, to invest, yes, and to imitate. I have reminded you where the great political adventure began and where it has led. But is this where we pitch our tents? Is this where we dig in? Absolutely not. Our third election victory was only a staging post on a much longer journey.                                                      And I know with every fibre of my being that it would be fatal for us just to stand where we are now. What would be our slogan for the 1990s if we did that? Would "consolidate" be the word that we stitch on our banners? Whose blood would run faster at the prospect of five years of consolidation?

Of course, we secure what we've achieved. But we move on—applying our principles and beliefs to even more challenging ground. For our purpose as Conservatives is to extend opportunity—and choice—to those who have so far have been denied them. 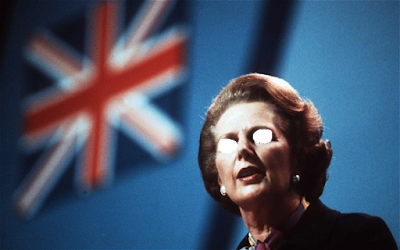