Mr President, our conference takes place at a time which could prove to be a historic turning point in world affairs. And we can say—with some pride—that Britain has played a major part in creating the opportunities which now open up before us. It is, of course, a time of tension and even of danger in the Persian Gulf. But there, too, Britain is giving a strong lead. And I do indeed pay tribute to both Geoffrey Howe and you, Mr President, for the lead which you have given. May I join you, Mr President, in speaking for this whole conference—and indeed for the people of this country—when I express our thanks and appreciation to the Merchant Officers and seamen who sail that vital waterway; and to the Royal Navy's Armilla Patrol and its minesweepers which protect them. We honour their dedication and their courage.

But today is also a time of hope. Indeed there is no mistaking the bracing air of change in the Soviet Union. In my many hours of talking with Mr Gorbachev in Moscow earlier this year, his determination to bring about far-reaching reform was plain. The difficulties and obstacles confronting him are massive. But we must recognise that anything which increases human liberty, which extends the boundaries of discussion and which increases initiative and enterprise in the Soviet Union, is of fundamental importance in terms of human rights. And that's why we support it. That is why we have publicly welcomed and encouraged those aspects of Mr Gorbachev's reforms which do just this. They are genuinely courageous—not least in their admission that, after seventy years, the socialist system has failed to produce the standard of life the Russian people want. But Mr President, we have yet to see that change carried through into the Soviet Union's policies towards the outside world. The traditional instruments of Soviet power—military strength, subversion, propaganda—are all being exercised as vigorously as ever. Afghanistan is still occupied. The Berlin Wall still stands, and Soviet weapons are still pouring into Third World countries which need food but not arms. They get the food from the free world and arms from the Soviet Union.

There is however hope in the agreement which now seems certain to be signed later this autumn, by the United States and the Soviet Union, to eliminate medium and shorter-range nuclear missiles. We welcome that agreement. Indeed Britain has contributed in a major way to its achievement. It's a success for the West—especially for the United States and President Reagan. But let us remember one thing. If we had listened to the Labour Party and to CND—insofar as you can distinguish between the two—that agreement would never have been achieved. The Russians would have kept their thirteen hundred nuclear warheads, while the West would have given away its three hundred, for nothing in return. That lesson must never be forgotten. Reductions in nuclear weapons come about not from weakness, but from strength. 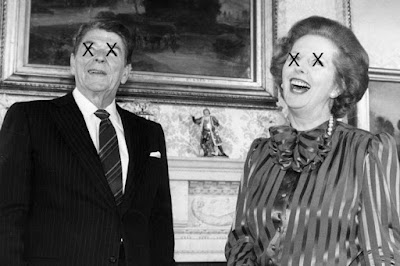